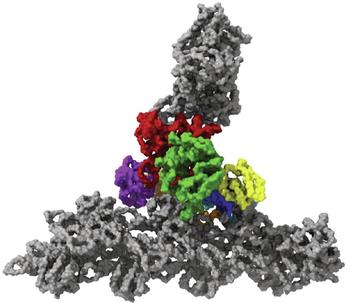 The protein complex Arp2/3 with its seven subunits (colored) while binding to actin filaments (grey).

New methods enable scientists at IST Austria to take a look at the innermost of cells: high-resolution images of deep-frozen cells show structures that previously could only be guessed at. Temperatures of minus 196 degrees Celsius enable high-resolution imaging of the cell’s interior. Researchers at the Institute of Science and Technology (IST) Austria are thus able to show for the first time how the active form of a protein complex plays critical roles in cell motility and other important biological functions look like.

The cells in our body are in motion. Some migrate from A to B to heal wounds or fight pathogens. They do so with the help of small “feet” at the leading edge of migrating cells, so-called lamellipodia. These thin extensions are pushed forward and bind to the surface while the rest of the cell is pulled along. Inside these feet is a dense network of interwoven protein threads, called actin filaments, which form the cell’s cytoskeleton. So far, it was unclear how the Arp2/3 complex, an assembly of seven proteins central for cell motility, sprouts off new actin filaments from pre-existing ones and thus generates dense, branched networks providing the required protrusive forces to the cell.

Until now, scientists had to decide when they wanted to analyze the structure of the Arp2/3 complex: One option was to study it in isolation, where the protein complex is in an inactive conformation and hence does not allow understanding of how the network is formed. In order to become fully activated, however, the Arp2/3 complex needs to be bound to actin filaments. This requires using a method called electron tomography, which comes at the cost of considerably lower resolution. "Previous electron tomography data of Arp2/3 complexes bound to actin filaments in a test-tube environment was too imprecise, making it impossible to unambiguously tell where the individual elements of the complex must be located," explains Florian Fäßler, a postdoc in the group of IST Austria professor Florian Schur.

For more than two years, he has been looking for a way to depict the protein complex in its natural environment in such a way that the individual structures can be analyzed precisely. Now he has succeeded. He imaged the complex within lamellipodia of mouse cells in its active actin-bound conformation. "We said to ourselves: Okay, we are going into the cell, where the environment is much more intricate because there is not only the protein complex and actin filaments but all sorts of other things as well. But this was the only way we were able to maintain this network in such a way that we could determine its structure," says molecular biologist Florian Schur.

This was made possible by temperatures of minus 196 degrees Celsius. Within milliseconds, the researchers froze the samples – too quickly to allow ice crystals to form that would have destroyed the cell’s fine structures. They then used one of the most powerful cryo-electron microscopes available – and the only one of its kind in Austria – to image cells from different angles using cryo-electron tomography. Doing so, the team collected enough data for the 3D reconstruction of over 10,000 Arp2/3 complexes in their active state. Combined with advanced image processing, they then generated a 3D model of the Arp2/3 complex at a resolution of less than one nanometer. For comparison: human hair is about 50,000 nanometers thick. "We are now able to describe relatively precisely the structure of the protein complex and its subunits and how they form the actin filament network inside the lamellipodium of previously living cells," says Florian Fäßler. "Five years ago, probably no one would have thought that this could be done," adds Schur.

Due to the advanced methodology, the team could refute an earlier model that had assumed much larger area connections between Arp2/3 complex and actin filaments. However, the scientists confirmed other aspects of how this complex is regulated and forms new actin filaments. With this knowledge, other scientists can now better understand this important protein complex's regulation and activity in its multiple roles beyond cell motility and the development of disease. "What we have done is to go as far as is currently possible with such complex samples in terms of methodology and resolution. With the current resolution, we have gained new biological insights, but it was also a methodological advance to show: It is possible," Schur says enthusiastically. Florian Fäßler now wants to improve the method even further to visualize other proteins and explore how far the method allows us to see inside a cell. "We are just starting to realize the full potential of cryo-electron tomography," says Schur.