Increasing the Activity of Catalysts 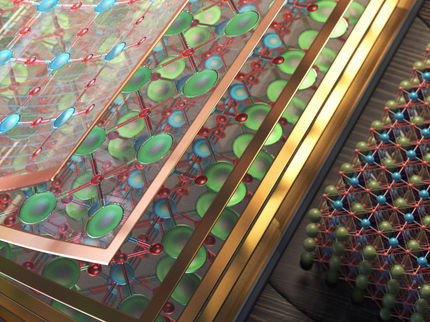 Researchers from Jülich, Aachen, Stanford, and Berkeley have studied the layered structure of a catalyst material (individual layers shown on the left; full crystal structure shown on the right) and found that an atomically thin surface layer can double the activity for the water splitting reaction.

A layer as thin as a single atom makes a huge difference: On the surface of an electrode, it doubles the amount of water split in an electrolysis system without increasing the energy requirements. Thus, the ultrathin layer also doubles the amount of hydrogen produced without increasing costs. Researchers from Jülich, Aachen, Stanford, and Berkeley report on this in the latest edition of the journal Nature Materials.

"By studying a model material we were able to gain a more detailed understanding of how the properties of a catalytically active electrode result from its structure," says Christoph Bäumer, first author of the study. Funded by a "Global Fellowship" from the Marie Skłodowska-Curie Actions he performed his research in Jülich and Aachen, as well as in the USA. "With this expanded understanding, we hope that better catalysts can be developed in the future to produce green hydrogen more energy-efficiently and thus more cost-effectively," the materials scientists explains.

The colourless hydrogen gas is known as green hydrogen if it is produced in a climate-neutral way, using electricity from renewable sources for the electrolysis of water. Hydrogen is considered an essential component of the energy transition, in part because it can store wind and solar energy in times of an oversupply to be released later. However, electrolytic hydrogen production at the negatively charged electrode (cathode) cannot take place without oxygen generation at the positively charged electrode (anode). Thus, catalysts that favour this kind of oxygen generation make the overall process more energy-efficient. The high energy requirements have been one of the main obstacles for a broad use of hydrogen so far.

Lanthanum nickelate (LaNiO3) that belongs to the perovskite material class is one such catalyst. The crystal structure alternates between layers of nickel oxide and lanthanum oxide. "We produced lanthanum nickelate catalysts more precisely and studied them in more detail than other scientists have before," says Felix Gunkel from the Peter Grünberg Institute, who led the research activities at Jülich. They did so by producing two different types of high-purity LaNiO3 crystals: In one type, the crystals terminate at a surface in which there are only lanthanum and oxygen atoms. Experts refer to this as lanthanum termination. In the other type, nickel and oxygen atoms form the surface (nickel termination).

It turned out that a nickel-terminated anode produces twice as much oxygen in the same time as an equally large lanthanum-terminated electrode. "Surprisingly, a single layer of nickel and oxygen atoms is responsible for a considerable increase in the catalytic activity of the material," Bäumer says. The team of scientists was also able to find a reason for this: During electrolysis, a disordered, catalytically very active layer of nickel dioxide forms on the Ni-terminated crystal, which cannot form with lanthanum termination. Compared to the initial structure, this newly formed nickel dioxide layer has ideal bonding states between nickel ions and oxygen or hydroxide ions, which increases the activity. "Our results indicate that if you want to develop particularly active catalysts, you have to take termination and the resulting structural changes under operating conditions into account for other materials as well," says William Chueh, professor at Stanford University.

In addition, the research results show the levers for determining this termination in perovskite materials: One of them is the temperature at which they are produced. The scientists discovered that in the case of lanthanum nickelate, high temperatures facilitate lanthanum termination. "To produce nickel-terminated crystals, we used a method that allows us to selectively apply an atomically thin layer of nickel atoms to the surface of a lanthanum-terminated crystal," Bäumer explains.

The researchers were only able to understand their findings because, for the first time in electrocatalyst research, they used a method that analyses the composition of the crystal surface by means of standing waves of synchrotron X-ray radiation. These standing waves can be generated by interference of the incident and the outgoing X-rays. A prerequisite for this was the atomically precise production of a LaNiO3 X-ray mirror consisting of 40 alternating layers, underneath the active layer to be investigated. The scientists used the Advanced Light Source in Berkeley (USA) as the X-ray source. The optimized bonding states between nickel ions and oxygen or hydroxide ions in the modified nickel surface were made evident by calculations conducted by scientists at the SLAC National Accelerator Laboratory in Menlo Park, USA.

The project was funded by the DOE Office of Science, and Baeumer was also supported by the European Union’s Horizon 2020 research and innovation program through a Marie Sklodowska-Curie fellowship.