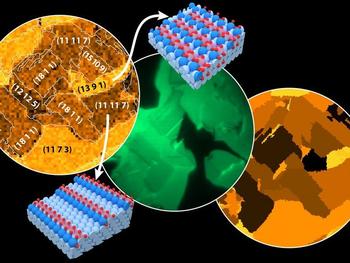 Metal surfaces play a role as catalysts for many important applications - from fuel cells to the purification of car exhaust gases. However, their behaviour is decisively affected by oxygen atoms incorporated into the surface.

This phenomenon has been known for a long time, but until now it has not been possible to precisely investigate the role of oxygen in complex surfaces point by point in order to understand the chemical background at the atomic level. This has now been achieved at TU Wien in cooperation with a team from the Elettra Synchrotron in Trieste. It became possible to explain why in previous studies partly contradictory results had been obtained: the oxygen atoms are not distributed evenly, but settle down particularly easily in very specific places.

Precision measurements instead of average values

"It is a great challenge to examine a metal surface directly during catalysis," says Prof. Günther Rupprechter from the Institute of Materials Chemistry at TU Wien. "You can, of course, put the whole catalyst into a reactor and measure exactly which chemical products are produced - but you only get an average value. You can't know which sites on the catalyst contributed to the chemical reaction and in what way."

Another possibility is not to use a real catalyst, but a simple, highly clean, idealised piece of it - such as a tiny single crystal, with well-known properties, which you can then study under the microscope. In this case, you get precise, reproducible results, but they don't have much to do with practical applications.

The research group led by Günther Rupprechter and Yuri Suchorski therefore combined the advantages of both approaches. They use thin foils made of rhodium, which consist of small grains. On each grain, the surface atoms can be arranged differently. In one grain, they form a smooth, regular surface with the outer atoms all in exactly the same plane; next to it, the atoms may arrange themselves to form a more complicated structure consisting of many atomic steps.

The favourite places of oxygen atoms

It is precisely these steps that turn out to be crucial. "For the catalytic activity, the oxidation state of the catalyst plays a central role - i.e. whether oxygen attaches itself to the metal atoms or not," says Philipp Winkler, the first author of the paper. “In earlier experiments, we found that we were often dealing with a certain state between "oxidised" and "not oxidised" - a situation that is difficult to interpret.”

However, this can be understood when one realises that not every grain of the rhodium foil is oxidised to the same degree. The oxidation starts preferably at corners, edges and steps - there it is particularly easy for the oxygen atoms to bind to the surface. Therefore, different grains with different surface structures are oxidised to different degrees.

Electron microscope and synchrotron in Trieste

This could be studied using a combination of highly developed technologies: "In a special electron microscope, the sample is irradiated with UV-light during the catalytic reaction and the resulting electron emission is registered with micrometre spatial resolution," explains Yuri Suchorski, "this allows us to determine exactly which grains of the rhodium foil are particularly catalytically active. The same sample is then examined again with a completely different microscope: grain by grain with X-rays at the synchrotron, obtaining very precise information about the surface oxidation of the sample."

If you combine both results, you can determine exactly which chemical behaviour is characteristic for particular structures. The key advantage: It is possible to examine the entire rhodium foil containing hundreds of different grains in a single experiment,. Instead of studying tiny single crystals separately, a sample containing many different structures used for catalysis is studied under real conditions, and information about the properties of these structures is obtained at once.

"This is an important step in catalysis research," Rupprechter emphasises. "We now no longer have to settle for just measuring an average value that inadequately describes the entire sample, but we can really understand in detail which atomic structures exhibit which effects. This will also make it possible to specifically improve important catalysts that are needed for many applications in energy and environmental technology."