Open Innovation on the rise in medical and pharmaceutical research 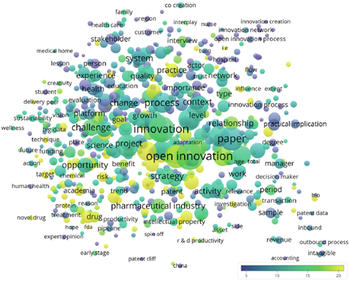 The Ludwig Boltzmann Institute Digital Health and Patient Safety has analyzed previously published scientific publications on open innovation in the context of medical and pharmaceutical research.

Open innovation (OI) in the context of medical and pharmaceutical research began to appear in the scientific literature in mid-2000s and has been steady on the rise. This is revealed by the analysis of around 380 relevant scientific publications, conducted by an international team of researchers led by the Ludwig Boltzmann Institute Digital Health and Patient Safety (LBI DHPS). The resulting findings were published in the peer-reviewed journal Frontiers in Pharmacology on 14 January 2021.

The majority of the analyzed research works were carried out in North America and Europe, with Italy in particular recording a large number of highly cited publications. In contrast, only few studies were found from Asia. Pharmaceuticals/pharmacology was revealed to be the most active industrial sectors with medical significance promoting OI. The bibliographic study has shown that papers affiliated with biotechnology or pharmaceutical companies were cited more often than academia-only studies. This can be due either to the higher quality or simply to the better industry-sponsored marketing of the publications, point out the authors.

“By OI we understand innovation processes based on purposively managed knowledge flows across organizational boundaries. This means that ideas and innovations no longer originate within an organization, but are also generated externally," says Atanas G. Atanasov, the coordinator of the study. Companies traditionally rely on internal resources to generate innovative ideas and new products. The open innovation concept was developed in order to better incorporate and use external know-how and externally generated ideas. In a broader sense, OI can be applied to any organization, including scientific institutions that draw on internal and external resources, ideas and partnerships to develop innovative solutions, products or knowledge.

“Considering the rapid recent developments in the area of digital technologies, it can be expected that in the near future we will witness increasing application of open innovation strategies from organizations operating on the interface of information technology and medicine, including digital health technologies. This excellently positions our new LBI DHPS in a vibrant newly developing scientific area“, says Atanasov.

This new study profiles for the first time the landscape of the scientific research on open innovation in medical and pharmaceutical research and reveals the promises of this area to make meaningful future contributions to the development of solutions and products for the betterment of human health.