Researchers investigate signal transduction in proteins on many time scales 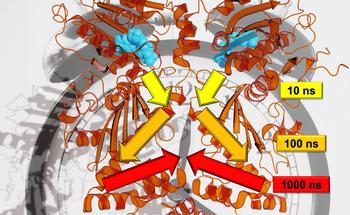 Researchers from Freiburg were able to reconstruct the exact course of signal transduction on many time scales.

A tree moving in the wind: How long does it take for the movement of a branch to reach the tree trunk? And via which pathway is this movement transmitted? Researchers at Albert Ludwig University are applying these questions to proteins, the molecular machinery of the cell. A team led by Prof. Dr. Thorsten Hugel from the Institute of Physical Chemistry and Dr. Steffen Wolf and Prof. Dr. Gerhard Stock from the Institute of Physics is investigating how the signals that cause structural changes in proteins travel from one place to another and how quickly this happens. Since many time scales, from nanoseconds to seconds, are involved in such signal transduction, scientists have not yet been able to analyse the exact process. However, by combining different experiments, simulations and theoretical studies, the Freiburg researchers have now succeeded. They have published their results in the scientific journal Chemical Science.

In contrast to trees, movements of the Hsp90 protein investigated in the study occur on logarithmic time scales: Each larger movement takes about ten times as long as the small individual movements that make up the larger one. "For example, a branch would move every second, the branch every 10 seconds and the stem every 100 seconds," Wolf explained. The different methods of investigation allowed the researchers to describe an allosteric interaction, that is, to show how a reaction process in Hsp90 alters a distant protein-binding site. The team found that this allosteric process occurs via hierarchical dynamics that span time scales from nanoseconds to milliseconds and length scales from pico- to several nanometers, Stock said.

In addition, the reaction process in Hsp90 is coupled to a structural change in the single amino acid Arg380. Arg380, in turn, relays structural information to a subdomain of the protein and eventually to the entire protein. The resulting altered structure closes a central binding site of the protein, thereby enabling it to fulfil new functions. The Freiburg researchers assume that similar hierarchical mechanisms, such as the one found in the protein Hsp90, are also of fundamental importance in signal transduction in other proteins. This could be useful for the control of proteins by drugs, says Hugel.