Mast cells: sentinels and high-speed messengers of the immune defense 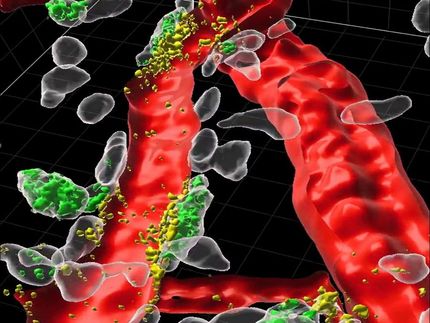 In order to fight pathogens, mast cells regulate inflammatory reactions of the immune system. Both mast cells and neutrophils are white blood cells and are critical for the body’s immune defense. A team of scientists around the immunologist Prof. Dr. Anne Dudeck and the bioengineer Jan Dudeck has discovered a crucial aspect of the communication between mast cells and neutrophils. These new findings may allow for developing innovative, targeted therapeutic strategies to dampen allergic responses and inflammatory reactions.

Neutrophils are rapidly recruited to sites of inflammation or infection. Consequently, they are the first mobile line of defense of our body against infections. In contrast, mast cells are tissue-resident cells that act as sentinels, responding to pathogens or tissue damage by attracting additional immune cells. For a long time, mast cells had a rather bad reputation, because they are also key cells of unwanted allergic reactions. Mast-cell released histamine causes the well-known symptoms that afflict persons with allergies: hay fever, itching, hives or even shortness of breath. But that is just one side of the coin. On the flip side, mast cells are essential for a fast immune response against pathogens, because they orchestrate the arrival of neutrophils at sites of inflammation or infection.

The team surrounding first author Jan Dudeck has analysed, how mast cells influence this recruitment of neutrophils. Scientists already established in the last couple of years that mast cells are involved in this process but up to now the exact molecular mechanisms remained elusive. Mast cells store a whole range of inflammatory mediators, including the messenger tumor necrosis factor (TNF), inside small secretory reservoirs, the granula.

The authors could show that against their expectation, the mast cell-derived TNF is dispensable for the activation of endothelial cells lining the blood vessel. Instead, the neutrophils circulating in the blood stream were directly activated in order to migrate into the inflamed tissues.

But how is the TNF of tissue-resident mast cells delivered to neutrophils circulating inside blood vessels? The Magdeburg scientists employed high-resolution 2-Photon-Microscopy to show in fascinating pictures that the mast cells use a surprising trick. They position themselves, guardian-like, directly around the blood vessel and even insert protrusions into the vessel lumen. In case of emergency, granula containing TNF are released directionally from these protrusions. Thereby the TNF immediately is present where the neutrophils can “see” it – in the bloodstream, circulating through the vessels. The TNF activates surface proteins on the neutrophils. Thereby the cells become stickier, can attach themselves at the vessel wall and then migrate into the surrounding tissue.

Prof. Dr. Anne Dudeck explains the significance of these results: “The capacity of mast cells to degranulate directionally into the blood stream might explain, why local allergen encounter can trigger a systemic anaphylactic shock. Next, we want to understand the exact mechanisms mast cells use to insert these protrusions into the vessel wall. Targeting these might reveal therapeutic strategies to dampen allergic shock or cytokine storm syndromes. At the same time, it might also enable us to harness the ability of mast cells to stimulate the immune response, notably the recruitment of neutrophils, during infections.”

The immunologist is leading the group Immunoregulation at the Institute for Molecular and Clinical Immunology at the Otto-von-Guericke University Magdeburg. Since many years, her research contributes to improving the reputation of mast cells. In previous studies, she already demonstrated that mast cells play a critical role during immune reactions, particularly contributing to adaptive, i.e. long-lived and highly specific immune responses against pathogens.