How bacteria sleep through antibiotic attacks

Once therapy is complete, the bacteria wake up and re-establish the infection 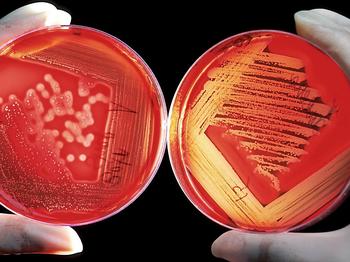 Bacteria can survive antibiotic treatment even without antibiotic resistance by slowing down their metabolism and going into a type of deep sleep. A research team funded by the Swiss National Science Foundation reveals the changes bacteria undergo to reach this "persister" state.

Resistant bacteria evade the effects of antibiotics by becoming less susceptible, for example by breaking the drugs down. But some bacteria have another survival strategy: they withstand treatment by going into a sleep-like state that enables them to tolerate antibiotics. Once therapy is complete, the bacteria wake up and re-establish the infection. This "persister" state can result in recurrent and difficult-to-treat infections. Researchers supported by the Swiss National Science Foundation (SNSF) have gained new insights into this bacterial population, thus paving the way for effective treatments. The results appear in the journal PNAS.

The research team worked with the bacterium Staphylococcus aureus, which is found on the skin of many people and often causes invasive and difficult-to-treat infections. The researchers took bacteria from an infected patient and cultivated them in Petri dishes. Certain bacterial colonies turned out to be smaller than others. "This tells us that the sample contains persistent bacteria," says Annelies Zinkernagel, professor of infectious diseases at the University of Zurich and University Hospital Zurich and one of the authors of the article. "Unlike other bacteria, persistent bacteria must first 'awaken', leading to delayed growth in the nutrient medium." Detection and analysis of persistent bacteria in a patient sample are particularly interesting because most of the previous studies on persistent bacteria used bacteria that were cultivated over a prolonged period of time in the laboratory and not taken directly from a patient.

To determine the conditions under which bacteria become persistent, the researchers carried out various stress tests. Stress factors include the presence of human immune cells, antibiotics or an acidic environment, as occurs with abscesses. The researchers discovered that the more extreme the stress conditions, the higher the percentage of persistent bacteria.

Using bacteria recently isolated from patients, the researchers also analysed how persistence mechanisms work. To do this, they looked at the entire set of bacterial proteins, known as the proteome. Their analysis showed that comprehensive molecular reprogramming had taken place and slowed metabolism down in persisters. However, it did not come to a complete standstill, but the bacteria rather entered a kind of deep sleep. In this way, the bacteria increased their chances of survival in a hostile environment. The researchers also observed that as soon as the environment becomes more hospitable, the persistent bacteria reverse these changes and again become infectious.

"The idea that bacteria do not halt their metabolism but slow it down and change it is not entirely new. However, it is still controversial," says Zinkernagel. "Our study confirms this idea with great precision." The current study looked primarily at persistent bacteria. "Previous experiments were based on mixed populations, and the results may thus have been biased by the other bacteria, which are usually in the majority."

New treatments on the horizon

A better understanding of these mechanisms will contribute to developing new treatments against persistent bacteria. The researchers also showed that vitamin A derivatives that target the cell membrane exhibit promising potential for combating less metabolically active bacteria. Alternatively, says Zinkernagel, "if we succeed in reactivating the growth of these bacteria, they would probably no longer be able to evade the antibiotics."

The fight against persistent bacteria is also important in the fight against resistance, because recurrent infections must be treated with antibiotics over an extended period. This constant exposure increases the risk of developing antibiotic resistance.