Conceptually new and sustainable process registered as a German patent 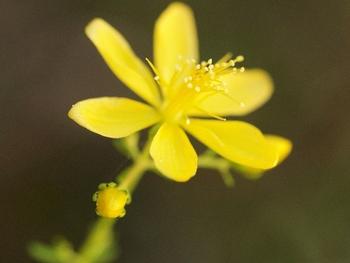 The flowers of St. John's Wort (Hypericum perforatum) have not only healing but also catalytic effects.

An interdisciplinary team of scientists from the School of Science at TU Dresden has for the first time used dried flowers of St. John's Wort (genus Hypericum) as an active catalyst in various photochemical reactions. This conceptually new and sustainable process was registered as a German patent and presented in the journal “Green Chemistry”.

Since ancient times, St. John's Wort has been used as a medicinal herb covering a wide range of applications such as the treatment of burns, skin injuries, neuralgia, fibrosis, sciatica and depression. Due to its high medicinal potential, the plant known in technical terminology as Hypericum perforatum even became "Medicinal Plant of the Year" in 2015. Now, scientists at TU Dresden have shown that there is much more to the herb than its healing properties.

To this end, two interdisciplinary groups from biology and inorganic chemistry have joined forces and thus achieved astonishing results. Originally, the research groups led by botanist Prof. Stefan Wanke and chemist Prof. Jan. J. Weigand wanted to synthesize graphene-like 2D structures from natural products in the joint project funded by the Sächsische Aufbaubank. For this purpose, hypericin, a compound of St. John's Wort, served as a template and starting material. In the course of the investigations, it turned out that hypericin efficiently catalyzes photochemical reactions. Prof. Weigand then came up with the idea of using the dried flowers of St. John's Wort, from which hypericin can be obtained by extraction, as a green and sustainable alternative to common catalysts.

"The chemistry of natural substances and especially the background of botany were completely new to us. The exciting results that came out of it are all the more gratifying. The interdisciplinary project shows how important it is in science to think outside the "box,"" says Prof. Weigand, commenting on the success of the collaboration.

The team is thus following a current trend in modern synthetic chemistry to include sustainable aspects. The search for sustainable, renewable and environmentally friendly photoredox catalysts is proving to be extremely challenging. The results now obtained are all the more promising. The plant compound hypericin, a secondary metabolite from St. John's Wort, is used as the active compound in chemical reactions without the need for prior chemical processing. The Dresden scientists have successfully applied for a German patent for this newly developed method (DE 10 2019 215 871).

Also Prof. Wanke is amazed at the success of the collaboration: "Although the research project started with a good idea, bringing it to life was not entirely trivial, as the two working groups first had to "get to know" each other. Our research fields and methods used were far apart. But soon the first unusually exciting results emerged. Everyone involved learned a lot. We would like to continue the research, but the funding is still missing.”