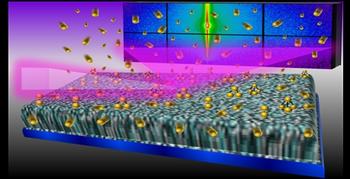 By scattering the X-ray light from PETRA III (coming from the left), the processes involved in the formation of a metal-polymer hybrid material could be detected in the sub-millisecond range. In the background, a characteristic scattering image

For the first time, a team of scientists has succeeded in capturing in real time the first few milliseconds in the life of a gold coating as it forms on a polymer. The team used DESY’s high-brilliance X-ray source PETRA III to observe the earliest stages in the growth of a metal-polymer hybrid material as a film of gold was applied to a polymer carrier, in a process that can be used in industrial applications. The group’s research, which it presented now in the journal Nanoscale Horizons, not only offers important new insights into how innovative hybrid nanomaterials form, it also sets a new world record in the temporal resolution achieved using GISAXS, a surface-sensitive scattering technique.

Metal-polymer materials form the basis of modern flexible electronics, such as organic field effect transistors (OFET) or novel television screens (OLED). A detailed understanding of the manufacturing process is essential in order to manufacture such composites using smaller amounts of starting materials, to make them more energy-efficient and to be able to use them more flexibly.

The team surrounding DESY’s Matthias Schwartzkopf has now “sputtered” gold onto polystyrene at PETRA III under conditions typically found in industrial applications: firing a beam of gold atoms onto the polymer at an average speed of around one kilometre per second. While this was happening, they continuously monitored the process on and below the surface. To make these measurements, the team adapted the P03 beamline, on which surface-sensitive X-ray scattering experiments are carried out, to make it suitable for real-time observations: this allowed them to examine the growth of the gold layer on the substrate with a spatial resolution of millionths of a millimetre and at 2,000 images per second, a rate never before attained using this technique.

“In our experiments, we were for the first time able to resolve the events that occur during the very first moments of nanolayer formation in four dimensions: the three spatial ones and time,” says Schwartzkopf. “Until now it has only been possible to model this sort of thing using elaborate simulations, some of which kept hundreds of processors busy for several days.” The research group has now recorded thousands of X-ray scattering images showing how the bulk of the gold atoms lodged on the surface of the polystyrene. Particularly during the first phase of the sputter coating, the researchers observed that two gold atoms that had fused together to produce a so-called cluster sometimes jutted out from the polymer as needle-like structures. However, individual gold atoms did penetrate deep into the substrate as well.

Having successfully observed this growth process directly marks an important first step towards a better understanding of the relationship between the structure and function of the nanomaterials. In the future, the scientists intend to deliberately control and optimise these processes in order to create more specific nanomaterials. Their wish list includes, for example, a new generation of catalytic converters that will work immediately after an engine is cold-started; solar cells that can harvest more light and run for longer; or catalysts and sensors whose effectiveness is optimised via the cluster size of the sputtered particles. “Our resolution of microseconds means that we are getting into an interesting time range with which we can even gain insight into electronic switching processes, for example,” says Schwartzkopf.

One of the technical innovations that was necessary in order to conduct the experiments was the fast LAMBDA X-ray detector, a product of the DESY spin-off X-Spectrum GmbH; this allows anything from individual light particles up to an intense X-ray beam to be detected. In addition, the group developed some of its own equipment in order to control and analyse the experiments. In a next step, the team wants to optimise the system to allow it to record observations at more than 4,000 frames per second; in the longer term, it even plans to go to 24,000 frames per second. “PETRA IV would be ideal for these investigations,” says Schwartzkopf. “This ultra-brilliant fourth-generation X-ray source would allow us to observe the early stages of growth of a host of materials, such as aluminium or carbon compounds, for example, and possibly help to make them usable in technical applications, something that is still extremely challenging today.” DESY is currently planning to convert its existing PETRA III facility to become PETRA IV, a unique 3D X-ray microscope that will provide unique live insights into the nanoworld with a 100 times higher resolution.