A gene provides both protection and destruction 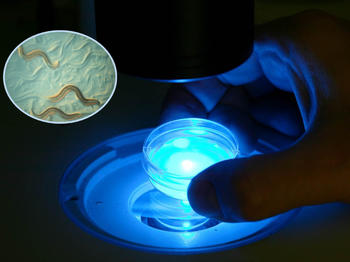 The nematode C. elegans, which is only 1 millimeter in size, is remarkably similar to humans from a genetic standpoint. Scientists can use the worm to study human diseases, life expectancy and even addictive behavior.

The family of ENDOU enzymes is found in most organisms, yet its functions are only poorly understood. In humans, it has been connected with cancer. RNA viruses, such as SARS-CoV2, contain a gene corresponding to ENDOU, and this is important for virus replication and the suppression of the immune response. However, so far only few details of the role of these enzymes are known. The research group led by the molecular geneticist Dr. Wenjing Qi from the University of Freiburg now contributes some more details to its function in a study published by the scientific journal “Nature Communications”. They suggest that the gene ENDU-2 could be responsible for triggering tumors in the body from a distance. In addition, the team discovered a novel, seemingly contradictive response: Under stress, ENDU-2 can contribute both to the protection of the organism and to its destruction.

The researchers studied the nematode worm C. elegans, which is frequently used for such genetic investigations. More than 60 percent of the genes are similar in worms and humans, including one for ENDOU, which is called ENDU-2. The current theory of tumor development suggests that cells only become cancer cells when errors, called mutations, accumulate in their genes. These arise, for example, from radiation, certain chemicals, or during aging. Qi showed back in 2017 that such errors do not have to occur in the cancer cells themselves, but they can also arise elsewhere in the body. Cancer is therefore triggered remotely, so to speak. The researcher suspected that the damaged cells in this case send signals to accomplish this, which then reprogram the other tissues. They now discovered the signal for this: ENDU-2.

„ENDOU/ENDU-2 is not only selectively discharged from stressed cells and circulated throughout the body, but it can also bind to the messenger RNA (mRNA) of many genes at the site of origin and in the target cells“, Qi explains. These mRNAs are the working copies of genes and are needed as blueprints for the production of all proteins and enzymes. What surprised the researcher was that ENDU-2 can perform two different functions under stress: at the site of origin, it cuts and destroys the mRNA, which reduces metabolism and prevents the already stressed organism from making faulty new proteins. At the destination, the RNA remains intact, and ENDU-2 helps these cells to survive. For this, however, it must be dosed precisely; otherwise it can cause tumor formation.

One conclusion that can be drawn from this could be that the worm specifically protects the embryos, i.e. its offspring, in times of great stress. “In this way, it seems guaranteed that whenever the organism’s self-healing powers are not sufficient for mother and child, it at least ensures the survival of the progeny”, speculates Prof. Dr. Ralf Baumeister, who was also involved in the study and in whose department Qi leads a research group. The Freiburg scientists now know that the loss of ENDU-2 can also reprogram stem cells. These then lose their immortality within a few generations. Next, the team wants to explore which conditions cause ENDU-2 to distinguish between destruction and protection.