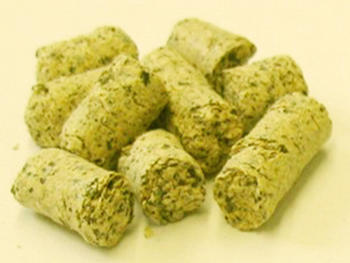 After the rapeseed has been de-oiled, protein-rich residues remain (rapeseed meal and press cake).

Just like cellulose, lignin and fats, proteins are renewable raw materials. Their potential for the chemical industry remains largely untapped. Research teams at the Fraunhofer Institute for Process Engineering and Packaging IVV are collaborating with partners to change all this, the idea being to use the promising technofunctional properties of vegetable proteins for industrial applications. The aim of the TeFuProt project is to shift away from petroleum and make more use of renewable raw materials.

Although proteins from vegetable sources were playing a key role in the chemical industry a hundred years ago, as a binding agent or adhesive for example, their use has been in decline since the boom of the petrochemical industry. The partners involved in the TeFuProt project, the name being short for technofunctional protein, are aiming to change all this and obtain proteins for industrial applications from agricultural waste products. The aim of this bioeconomy approach is to counteract the scarcity and long-term price increase in fossil raw materials and use renewal raw materials as an alternative to petroleum.

Rapeseed as a source of protein

The processing of agricultural raw materials such as rapeseed results in large quantities of protein. These proteins are a by-product of rapeseed oil recovery, a process that presses oil out of the seed. Protein-containing by-products, so-called rapeseed meal and rapeseed press-cake, are left behind. “Up until now, this residue has been used mainly as a foodstuff in livestock farming. But this usage is limited because of the bitter sub-stances contained”, explains Andreas Fetzer, scientist at the Fraunhofer Institute for Process Engineering and Packaging IVV in Freising. Due to their functional properties, such as the ability to form foams, gels and films, and their ability to retain water, the protein fractions of the rapeseed press-cake have a huge potential for a broad range of technical applications. They are ideal as additives for paints, varnishes, adhesives, lubricants, building materials, detergents and polymers. “The vegetable proteins are opening the door to the development of novel, sustainable, bio-based products with improved properties”, explains Fetzer. And this also reduces our dependence on fossil resources and drives forward climate-friendly production.

Researchers at the Fraunhofer Institute for Process Engineering and Packaging IVV were tasked with investigating how to isolate the proteins from the rapeseed meal and rape-seed press-cake and to develop the processes required. They were also in charge of the protein modification and pre-formulation in such a way that they can be delivered to the development partners for tests either in the form of dried powders or in liquid solution. The technofunctional properties such as solubility, foaming and emulsifying behavior, as well as film forming properties were also analyzed. Besides the Fraunhofer Institute for Process Engineering and Packaging IVV, ANiMOX GmbH and Naturstoff-Technik GmbH (2014-2017) were also entrusted with manufacturing and refining the protein.

The film-forming properties in particular produced convincing test results: “Upon drying proteins dissolved in water, to which a bio-based plasticizer was added, in a petri dish, the water evaporates and the proteins cross-link to form a stable film. Thus, proteins are principally suitable as alternative binding agents in paints and varnishes, wood stains or parquet coatings which usually contain petroleum-based raw materials. Acrylates, for example, can be replaced by protein preparations”, explains Fetzer. In addition, the proteins show the ability to efficiently bind colorants or act as barriers. This showed an added benefit of the protein-based coating especially in the wood sector: The colorants were effectively prevented from “bleeding” out of the wood.

Fetzer and his colleagues successfully recovered four types of protein through four dis-tinctly different processes. “We de-oil, grind and dissolve the rapeseed press-cake in water. The mixture is then centrifuged to separate the solids from the liquids. After that, we refine the aqueous extract with the dissolved proteins”, says the scientist describing the process sequence. The protein isolates recovered often have a protein content of over 90 percent.

The long-term project work of the 18 partners in total has produced a series of promising products, some of which are already available as prototypes. These include biodegradable films as a packaging material for detergent pouches, for example, or as plant coverings, as well as fiberboard from production residues, and binding agents modified with rapeseed protein. Flame-retardant insulating foams for the construction industry or molded foams for packaging, fiber protection and dye transfer inhibitors in eco-friendly laundry detergents, thickening components for lubricants or binders for lubricating lacquers and additives in universal cleaning agents for wood surfaces complete the list of innovative solutions. “In many cases, we have successfully integrated the proteins into the products and generated properties with added value”, says the researcher. The next steps aim to optimize the preparations and get them ready for the market. The long-term aim of the partners is to replace petrochemical-based products with bio-based ones on a large scale and create added value through the use of vegetable proteins.