Such reprogrammed cells could perform medical tasks in our bodies, such as diagnosing diseases or providing treatment 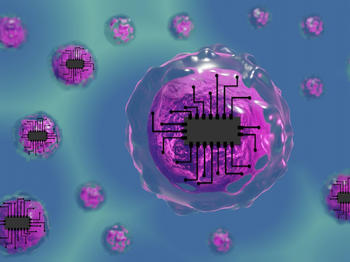 Scientists at ETH Zurich are working to develop information-​processing switching systems in biological cells. Now, for the first time, they have developed an OR switch in human cells that reacts to different signals.

Biological cells might one day be equipped with artificial genetic programs that work in much the same way as electronic systems. Such reprogrammed cells could perform medical tasks in our bodies, such as diagnosing diseases or providing treatment. One potential application would be altered immune cells that combat tumour cells. Since tumour cells have different genetic characteristics, the following biochemical program, for example, would have to run in the therapeutic cells: “Destroy a cell if it is type X or Y or Z”.

In mathematics and electronics, such a function is called an OR gate. “These are needed in decision-​making processes whenever multiple different things lead to the same outcome, when you have to deal with alternative inputs at the same time”, explains Jiten Doshi, a doctoral student in ETH Professor Yaakov Benenson’s group in the Department of Biosystems Science and Engineering at ETH Zurich in Basel. In collaboration with colleagues, Doshi and Benenson have for the first time developed an OR gate – a molecular switching element that emits a biochemical output signal when it measures one of two or more biochemical input signals – in human cells.

To realise the OR gate, the ETH researchers used transcription, the cellular process in which a gene’s information is read and stored in the form of a messenger RNA molecule. This process is initiated by a class of molecules known as transcription factors, which bind in a specific manner to an "activation sequence" (promoter) of a gene. There are also genes with several such activation sequences. One example of this is a gene called CIITA, which has four such sequences in humans.

The ETH researchers turned to this gene for inspiration and developed synthetic constructs with a gene that is responsible for the production of a fluorescent dye and that has three activation sequences. Up to two transcription factors, and one or more  small RNA molecules specifically bind to and control each of these sequences. The gene construct produces the dye when transcription is initiated via at least one of the three activation sequences –  i.e., via sequence 1 or sequence 2 or sequence 3. The researchers filed a patent application for this new system.

As Benenson stresses, this research closes a loop. From a historical standpoint, information processing has developed in living creatures over the course of evolution: humans and animals are very good at taking in sensory input with their brains, processing it and responding accordingly. Only in the 19th century did the development of switchable electronic components began: first with the relay; later with vacuum tubes; and finally with transistors, which enabled the construction of modern computers.

In their research, the ETH bioengineers try to bring these mathematical and electronic information processing approaches back into biological systems. “For one thing, this helps us to better understand biology, such as how biochemical decision-​making processes take place in cells. For another, we can use these approaches to develop new biological functions,” Benenson says. The researchers benefit from the fact that biological cells offer ideal conditions for this.

This cellular information processing is expected to be used primarily in medical diagnostics and treatment. “Today’s medical treatments are usually rather simple: we often treat diseases with just a single drug, regardless of how complex the biology and the causes of diseases may be,” Benenson says. This stands in contrast to how an organism deals with external changes. The body’s stress reactions, for example, can be very complex.

“Our biomolecular information processing approach holds out the promise of using artificial genetic networks that can identify and process different signals to one day develop complex cellular diagnostics systems and potentially more effective forms of treatment,” Benenson says. Such forms of treatment would also identify when a normal state has been reached following successful treatment. For example, an ideal cancer treatment fights tumour cells as long as they are present in the body, but does not fight healthy tissue, because doing so would cause damage.