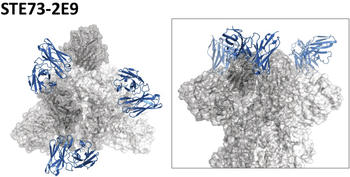 Shown is a model of the best antibody from this study and the binding to the spike trimer protein of the SARS-CoV-2 virus. On the left is the “top” view of the spike protein and on the right is the “side” view.

An international research team of the Technische Universität Braunschweig and the Helmholtz Centre for Infection Research (HZI), led by the Department of Biotechnology of the TU Braunschweig, has reported on the development of special antibodies against SARS-CoV-2 in the journal Nature Communications. These antibodies prevent the viruses from entering host cells and were isolated from an antibody gene library that had already been produced from immune cells of healthy donors before the pandemic. The study shows how, in the future, active substances to previously unknown, emerging viruses can be produced very quickly without patient material.

The research team from the TU Braunschweig and the HZI succeeded in generating the antibodies to SARS-CoV-2 in vitro using antibody phage display technology. This was based on the existing HAL9/10 antibody gene library, and for the best-performing antibodies, the researchers additionally mapped the binding sites to the virus and modeled the corresponding molecular interaction structure.

“This project would not have been possible without the truly extraordinary efforts of everyone on the team during the first months of the pandemic”, says Professor Michael Hust from the Department of Biotechnology, who initiated the project back in January 2020. “In addition to the potential use of the isolated antibodies against SARS-CoV-2, this study demonstrates a method for generating active agents against previously unknown, emerging viruses very quickly in the future without patient material.” Especially with pathogens from distant parts of the world, he said, this could mean a decisive head start in the fight against a pandemic, as researchers could begin work on an active agent before the first cases occur in Europe. The researchers at TU Braunschweig, in collaboration with the HZI and other partners, are therefore proposing to build a precautionary infrastructure to ward off future pandemics.

“To be better equipped against future pandemics, it is essential to establish long-term structures in research and development”, says Professor Dirk Heinz, Scientific Director of the HZI, in whose high-security laboratory the activity of antibodies against SARS-CoV-2 was detected. “A national platform for antiviral agents would be ideal, and we are currently working with partners to design one. The successful work on the antibodies shows – especially in times of limited mobility – the value of close collaboration between the highly committed partners on our research campus. In doing so, we have shown that Braunschweig can make another important contribution to pandemic response.”

Professor Luka Cicin-Sain and Dr. Ulfert Rand, head and scientist of the Immune Aging and Chronic Infections Research Group at the HZI, are very pleased with the results of the study. “It was a great moment when we saw in the experiment that the antibodies could actually prevent infection with SARS-CoV-2. We immediately realized that we had a potential weapon against the pandemic in our hands”, says Ulfert Rand. Cicin-Sain adds, “Ulfert Rand developed the methods for measuring the antibodies’ antiviral activity in record time. Overall, many scientists in our group and at the HZI supported us, making for a distinct team success.”

Dr. Maren Schubert from the Department of Biotechnology at TU Braunschweig, who was instrumental in accelerating the work through a new method she developed for producing the new viral components in insect cells: “We are very happy that our project has the potential to mitigate the Corona pandemic and save human lives. But it will also allow us to prepare much faster against future threats.”

Professor Stefan Dübel, head of the Department of Biotechnology at TU Braunschweig and one of the inventors of the method of antibody phage display which allowed the very rapid antibody generation, adds: “With this study, we have shown how we can take faster and more effective action against future epidemics of previously unknown infectious diseases than was previously possible – even if they have not yet reached us from distant parts of the world. This has given us a new option to better counter global spread in the future, as we painfully experienced with SARS-CoV-2.”