How “paralyzed” immune cells can be reactivated against brain tumors 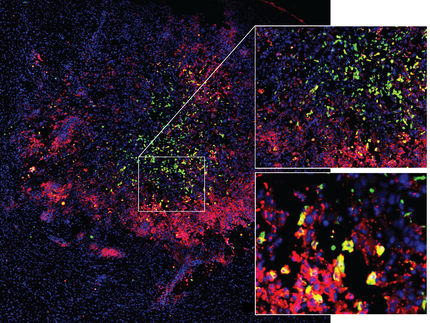 Microglia and macrophages migrate into a brain tumor and are reprogrammed during this process. Red: Activated state; gre immunosuppressive, "paralyzed" state, yellow: transition between activated and immunosuppressive state.

Brain tumor cells with a certain common mutation reprogram invading immune cells. This leads to the paralysis of the body's immune defense against the tumor in the brain. Researchers from Heidelberg, Mannheim, and Freiburg discovered this mechanism and at the same time identified a way of reactivating the paralyzed immune system to fight the tumor. These results confirm that therapeutic vaccines or immunotherapies are more effective against brain tumors if active substances are simultaneously used to promote the suppressed immune system.

Diffuse gliomas are usually incurable brain tumors that spread in the brain and are difficult to completely remove by surgery. Chemotherapy and radiotherapy often only have a limited effect too. Oncologists are thus urgently trying to find innovative treatment approaches to fight the gliomas using the immune system – by means of therapeutic vaccines or immunotherapies.

Gliomas do not consist entirely of cancer cells: up to 50% of the tumor mass is made up of microglia cells – the brain's own phagocytes – and of macrophages that enter the tumor through the blood vessels. Macrophages are also scavenger cells, but they are not effective in fighting tumor cells.

"If we are to make progress in developing immunotherapies or therapeutic vaccines, we need to understand exactly how the immune environment behaves during tumor development. Moreover, we were interested in whether special genetic features of the gliomas have a particular influence on the function of the glioma-associated immune cells," explained Michael Platten, Director of the Department of Neurology of University Medicine Mannheim, Head of Division at the German Cancer Research Center (DKFZ), and director of the current study.

Scientists from Platten's division have now teamed up with Marco Prinz, Medical Director of the Institute of Neuropathology in Freiburg, and his working group to publish a molecular "status analysis" of the glioma-associated immune cells. To do so, they specifically studied the RNA and protein profiles of individual microglia cells and macrophages. Using tumor models in mice, they were also able to demonstrate the development of the immune environment over the course of the disease.

The researchers were particularly interested in tumors with what is known as an IDH mutation, which is found in around 70% of all low-grade gliomas. These tumor cells have an identical mutation that leads to a particular protein building block being exchanged in the IDH enzyme.

As a result of the IDH mutation, the glioma cells release the cancer-promoting metabolic product (R)-2-HG, which, as the researchers discovered, affects the invading macrophages. These scavenger cells are reprogrammed as it were, blocking an immune response against the tumor: they release messenger substances that suppress the immune system and inhibit T cell activity – researcher refer to this as "immune paralysis". "Ultimately, the IDH mutation enables the gliomas to protect themselves against the human immune system," explained Mirco Friedrich, DKFZ researcher and physician at Heidelberg University Hospital, one of the lead authors of the current publication.

The researchers were subsequently able to decipher the molecular mechanism by which (R)-2-HG reprograms the macrophages: the cancer-promoting metabolic product interferes with the amino acid metabolism of the scavenger cells. This leads to activation of a central immune system regulatory molecule, aryl hydrocarbon receptor. The activated receptor causes immunosuppression of the macrophages.

In view of this central role of the aryl hydrocarbon receptor, the researchers decided to specifically deactivate the function of this key molecule. To do so, they used a specific substance co-developed by DKFZ and Bayer. They combined this substance with a special immunotherapy, known as an immune checkpoint inhibitor. This immunotherapy is normally ineffective, but the combination rendered it effective in an animal model and prolonged the lives of the mice with IDH-mutant tumors.

"For the first time, we have thus demonstrated that the 'paralyzed' glioma-associated scavenger cells can be specifically reactivated by drugs in IDH-mutant gliomas," Mirco Friedrich remarked. "The work is a good example of how single cell studies can lead to a treatment mechanism," added Roman Sankowski from Freiburg University Hospital. As Lukas Bunse, a physician at DKFZ and Mannheim University Medicine, explained, "We were recently able to prove in an early clinical study that a therapeutic vaccination against IDH-mutant diffuse gliomas triggers the desired immune response in the study subjects. Our current studies now demonstrate how to sidestep the immunosuppressive environment in the brain and improve the effectiveness of this vaccine even further. This is an encouraging result showing that the immune system can help fight this currently almost incurable disease more effectively." Clinical studies will now be conducted to reveal whether this treatment strategy is a promising option for glioma patients.