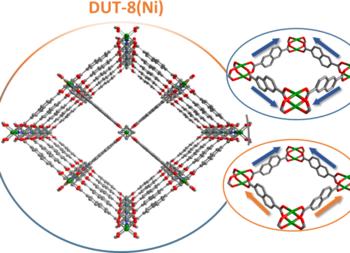 View into a MOF crystal exemplified by DUT-8. The massive pores are clearly discernible.

Metal-organic framework compounds (MOFs) are widely used in gas storage, material separation, sensor technology or catalysis. A team led by Prof. Dr. Stefan Kaskel, TU Dresden, has now investigated a special class of these MOFs at the MX beamlines of BESSY II. These are "switchable" MOFs that can react to external stimuli. Their analysis shows how the behaviour of the material is related to transitions between ordered and disordered phases.

Metal-organic framework compounds (MOFs) consist of inorganic and organic groups and are characterised by a large number of pores into which other molecules can be incorporated. MOFs are therefore interesting for many applications, for example for the storage of gases, but also for substance separation, sensor technology or catalysis. Some of these MOF structures react to different guest molecules by changing their structures. They are thus considered switchable.

One of these is "DUT-8", a material that has now been studied at the MX beamlines of BESSY II.  "MOF crystals can be analysed very well at the MX beamlines," says HZB expert Dr. Manfred Weiss, who heads the MX team.  “MOF crystals have many things in common with protein crystals. For example, both are interspersed with large pores, which are filled with liquid in the protein crystals, while those in MOFs provide space for guest molecules," Weiss explains.

"The diffraction patterns that DUT-8 showed on the HZB-MX beamlines were extremely complex. We were now able to attribute this to various transitions between ordered and less ordered phases," explains Stefan Kaskel. The enclosed guest molecule directs the network into one of over a thousand possible disorder configurations.  The results contribute to a better understanding of switching processes and gas exchange reactions in such MOF structures, so that future functional MOF materials can be developed in a targeted manner.