Protein balance in the reproductive system can prevent disease 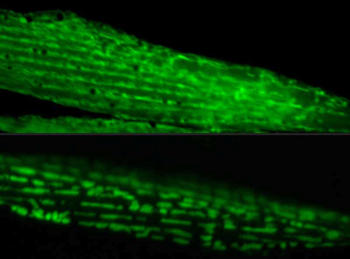 Top: Mitochondria in healthy muscle of C. elegans. Bottom: fragmented mitochondria in muscle after aggregation of proteins was induced in the germline.

A recent study shows that a healthy reproductive system can prevent disease-related protein accumulation in distant tissues, such as neurons, and alteration of mitochondria - the power plants of cells. An imbalance of proteins, for example a build-up of damaged proteins in brain cells, can lead to diseases such as Alzheimer's, Huntington's disease and amyotrophic lateral sclerosis (ALS). Because these diseases are associated with aging and the reproductive system is one of the first tissues to decline during aging, Dr. David Vilchez and his team investigated whether the protein balance status, called protein homeostasis or proteostasis, of germ cells affects other tissues and organs. Using a model organism, the nematode Caenorhabditis elegans, the scientists:in show that when proteins accumulate, the germ cells secrete certain signals (Wnt signals) that induce changes in the mitochondria. This in turn leads to protein accumulation in other tissues such as muscles or neurons. The article 'Systemic regulation of mitochondria by germline proteostasis prevents protein aggregation in the soma of C. elegans' has now been published in Science Advances.

"We were very surprised to see that just by inducing protein clumps in germ cells, we could change the mitochondrial network of the whole organism. This change also induced protein accumulations in neurons," said Guiseppe Calculli, first author of the study. In the future, it would be of great interest to investigate whether germ-specific proteins also accumulate during aging and whether this process contributes to the age-associated aggregation of proteins characteristic of pathologies such as Huntington's disease or ALS.

"Our findings open a new door to understanding why protein aggregates accumulate in the neurons of patients with Huntington's disease and ALS. Since these aggregates may contribute to the neurodegeneration characteristic of these diseases, which remains incurable, further understanding of the process discovered here may lead to new therapeutic approaches," explained Vilchez, research group leader at the Cluster of Excellence for Aging Research CECAD and the Center for Molecular Medicine Cologne (ZMMK) and head of the study.