Just Mix It Up 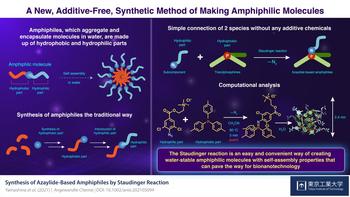 Amphiphilic molecules, which aggregate and encapsulate molecules in water, find use in several fields of chemistry. The simple, additive-free connection of hydrophilic and hydrophobic molecules would be an efficient method for amphiphilic molecule synthesis. However, such connections, or bonds, are often fragile in water. Now, scientists at Tokyo Institute of Technology have developed an easy way to prepare water-stable amphiphiles by simple mixing. Their new catalyst- and reagent-free method will help create further functional materials.

Soaps and detergents are used to clean things like clothes and dishes. But how do they actually work? It turns out that they are made of long molecules containing a “hydrophilic” or water-loving part and a “hydrophobic” or water-hating part. When added to water, these molecules self-assemble to form giant, spherical “supramolecules” called micelles that get the cleaning up done by using the hydrophobic part to trap the grease.

Known as “amphiphiles” to chemists, these molecules have garnered much attention due to their utility in developing supramolecular materials. The synthesis of amphiphiles usually requires several reactions and purifications. In contrast, if hydrophilic and hydrophobic molecules could be simply connected without chemicals, it would be a very powerful synthetic method. In fact, some reactions that do not require any catalysts or reagents are known today. However, they have a fatal flaw: their chemical bonds are unstable in water, the very medium necessary for micelle formation!

Addressing this issue in a recent study published in Angewandte Chemie, scientists at Tokyo Institute of Technology (Tokyo Tech), Japan, led by Dr. Masahiro Yamashina and Prof. Shinji Toyota, have now come up with a solution using a chemical reaction known as the “Staudinger reaction”, in which an azide (hydrophilic part) and a phosphine (hydrophobic part) combine to form an “azaylide”.

“Although a typical Staudinger reaction proceeds rapidly and quantitatively at room temperature, the formed azaylide readily hydrolyses into a primary amine and phosphine oxide in water. In contrast, a ‘non-hydrolysis’ version of this reaction was recently found, in which a halogen atom, such as chlorine, added to an azide compound significantly improves the hydrostability of azaylide,” explains Yamashina.

Accordingly, the team of scientists prepared a chlorinated azide subcomponent and mixed it with tris(p-tolyl)phosphine (PTol3), triphenylphosphine (PPh3), and tris(p-anisyl)phosphine (PAni3) to obtain the azaylide-based amphiphiles NPTol3, NPPh3, and NPAni3, respectively. They then dissolved the amphiphiles in water to observe their self-assembling behavior and found spontaneous aggregation in each case. Further measurements revealed that the aggregates were in the shape of spheres roughly 2 nm in size.

Finally, when tested with hydrophobic organic dyes like Nile Red and BODIPY, the team saw that the dye molecules became encapsulated by the spherical azaylide aggregates, exhibiting desirable amphiphile behavior. “The azaylide formation presented in our study serves as a viable technique for on-site preparation of water-stable amphiphiles without catalysts and reagent, which can help create more such functional materials in future,” comments an excited Yamashina.

The team’s discovery will certainly help usher in significant advancements in the development of highly versatile functional materials, even in aqueous media.