Organic mixed valence pigments absorb in the near infrared 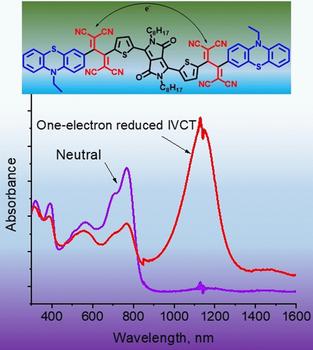 In photosynthesis and organic photovoltaics, pigment molecules convert light into electrical charge. A team of chemists have now produced an unusual organic pigment, which is “switched on” by an electrical charge to become a potent dye that absorbs light in the near-infrared range. The team's study, published in the journal Angewandte Chemie, suggests potential applications in systems for electrophysical materials research, photovoltaics, and sensor technology.

Charged pigments with intense colors have been predominantly metal based. One well-known example is iron-based Berlin blue or Prussian blue, which is a rich, deep blue. In terms of their chemistry, dyes and pigments of this kind are symmetrical molecules, with one side having a higher charge than the other. The sides exchange electrons, and the molecule absorbs light that is at the same wavelength as this energy exchange.

Purely organic pigments with similarly intense colors are rare. Nonetheless, Francis D'Souza's team from the University of North Texas, and colleagues, have now developed a modular organic molecular system precisely to meet this brief. Compared to metals, organic materials have the advantage of being easy to modify. The team chose to target modular construction of the dye molecules, to give customizable molecules that could potentially be given a wide variety of different properties.

The core of the new molecule was made of a red fluorescent dye molecule. The researchers then attached a two-part “push–pull”, or “donor–acceptor”, molecular system to both sides of this core. These systems were able to stabilize electrical charges under specific conditions.

In the uncharged state, the pigment was just a blue-colored dye molecule. But when an electronic charge was applied, it demonstrated its full capabilities. The team observed a new, intense absorption band, but not in the visible-light range. The new dye absorbed in the near-infrared range, i.e., in the transitional region between visible light and heat radiation on the electromagnetic spectrum.

It was only when the two donor–acceptor units resonated with each other that absorption became possible: “The additional, free electron shuffles between the two chemically equivalent entities revealing a new charge-transfer peak in the near-infrared region,” state the authors. The molecule had become a mixed valence compound, with similar properties to metal-based dye compounds.

These electronically switchable organic pigments could be excellent model substances for basic research, says D'Souza. They could be used to help better understand electron transfer, as found in photosynthesis, for example. In addition to their potential as research aids, they could be used as efficient electron-transporting material in photonic devices and are also suitable as markers for analyzing electron transitions.