Researchers may have found the “Achilles’ heel” of the virus 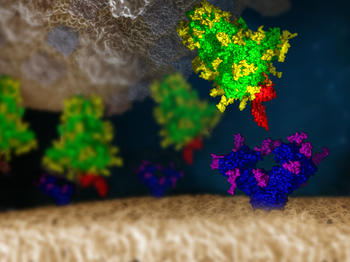 ©IMP/IMBA Graphics 2021. The protein and glycan structures were provided by Chris Oostenbrink (BOKU)

Researchers identify two sugar-binding proteins that impede the viral entry of circulating SARS-CoV-2 variants. The team, spearheaded by researchers at IMBA – Institute of Molecular Biotechnology of the Austrian Academy of Sciences – may have found the “Achilles’ heel” of the virus, with potential for pan-variant therapeutic interventions. The findings are now published in the EMBO Journal.

Amidst the ongoing COVID-19 pandemic, it is paramount to find new ways to contain the spread of SARS-CoV-2. To this end, the Spike (S) protein is of particular interest as it mediates the main entry mechanism of the virus into host cells. Thus, the interaction of the SARS-CoV-2 S protein with the host cells’ angiotensin converting enzyme 2 (ACE2) determines the infectivity of the virus. The importance of the S protein for the survival and spread of the virus dictates the presence of a camouflage mechanism. Hence, the virus uses so-called glycosylation as a cloaking mechanism to form a sugar coat at specific sites of the Spike protein in order to hide from the host’s immune response.

Spotting the wolf by its sheep's clothing

The reasoning might seem simple at first sight, but one obvious question immediately surfaced in the team around IMBA group leader Josef Penninger, who is also the director of the Life Sciences Institute at the University of British Columbia (UBC), Vancouver, Canada. Namely: what about the lectins, the sugar-binding proteins? "We intuitively thought that the lectins could help us find new interaction partners of the sugar-coated Spike protein," says co-first author David Hoffmann, a former PhD student in the Penninger lab at IMBA. The attractivity of this question lies precisely in how spot on it is: the glycosylation sites of the SARS-CoV-2 Spike protein remain highly conserved among circulating variants. Thus, by identifying lectins that bind these glycosylation sites, the researchers could be well on their way to developing robust therapeutic interventions.

Indeed, the team developed and tested a library of over 140 mammalian lectins. Among these, two were found to strongly bind to the SARS-CoV-2 S protein: Clec4g and CD209c. “We now have tools at hand that can bind the virus’ protective layer and thereby block the virus from entering cells,” summarizes Stefan Mereiter, co-first author and postdoctoral researcher in the Penninger lab. Mereiter then exclaims: “This mechanism could indeed be the Achilles’ heel scientists have been longing to find!”

The road from SARS-CoV-2’s “immunity shield” or “sheep’s clothing” to its Achilles’ heel involved several state-of-the-art research techniques. In collaboration with Peter Hinterdorfer of the Institute of Biophysics at the University of Linz, Austria, the team used high-tech biophysical methods to analyze how the lectin binding takes place in detail. For example, the researchers measured which binding forces and how many bonds occur between the lectins and the Spike protein. This also made it clear to which sugar structures Clec4g and CD209c attach.

Therapeutic interventions on the horizon

More good news: the team found that the two lectins bind to the N-glycan site N343 of the Spike protein. This specific site is so crucial to the Spike that it can never be lost in any infectious variant. In fact, a deletion of this glycosylation site renders the Spike protein unstable. In addition, other groups have also shown that viruses with mutated N343 were non-infectious. “This means, that our lectins bind to a glycan site that is essential for Spike function - it is therefore very unlikely that a mutant could ever arise that lacks this glycan,” explains Mereiter.

And the story does not end here. To the team’s excitement, the two lectins also decreased SARS-CoV-2 infectivity of human lung cells. For Josef Penninger and the whole team, these findings hold promise for pan-variant therapeutic interventions against SARS-CoV-2.

Penninger sums up: “The approach compares to the mechanism of the drug candidate ‘APN01’ [Apeiron Biologics], which is undergoing advanced clinical trials. This is a bioengineered human ACE2 that also binds to the Spike protein. When the Spike protein is occupied by the drug, the gateway into the cell is blocked. Now, we identified naturally occurring, mammalian lectins that are capable of doing just that!”