Crystals Made to Fit 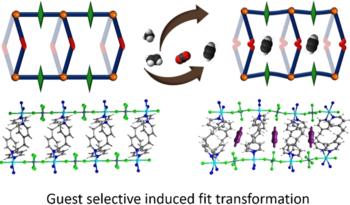 We often say that a substrate fits into its enzyme like a key in a lock, but this metaphor is imperfect. Substrate binding can also change the lock (the structure of the enzyme) to induce a perfect fit. In the journal Angewandte Chemie, an international team of researchers has now introduced a non-biological, crystalline material that demonstrates induced-fit binding behavior when it highly selectively takes up acetylene (C2H2) into its pores.

An induced-fit effect imitated from nature could be useful in increasing the selectivity of porous crystalline materials and to better handle difficult separation processes or gas separations, for example. Promising candidates include materials made of individual organic and/or inorganic linker molecules and metal ions as nodes. These could be metal–organic frameworks (MOFs) or hybrid ultramicroporous materials (HUMs), which are soft (less rigid) than classic porous materials like zeolites.

A team led by Susumu Kitagawa and Michael J. Zaworotko has now developed a novel type of soft HUM that can change its pores to allow acetylene molecules to fit into them perfectly. The material, called sql-SIFSIX-bpe-Zn, binds acetylene with unusual strength and allows for highly selective separation of acetylene from ethylene (C2H4), or carbon dioxide (CO2).

Highly pure acetylene is an important raw material for the chemical industry, including in the production of plastics, as well as microelectronics. Current production processes for acetylene produce impurities, such as ethylene and carbon dioxide, which are difficult and energy-intensive to remove. The new induced-fit adsorbent “recognizes” acetylene specifically as its guest molecule and alters its structure reversibly to form tight cavities with strong interactions and high binding energy for the guest.

This new HUM developed by the research team from the University of Limerick (Ireland), Kyoto University (Japan), Stellenbosch University (South Africa), and the University of South Florida (Tampa, USA) has a flexible framework comprised of hexafluorosilicate anions, flexible organic linking molecules, and zinc ions at the nodes. As determined by a variety of analytical methods and computer models, the transformations observed in the presence of acetylene primarily stem from interactions of the acetylene with the inorganic anions. This differs from other previously known examples of induced fit. It is expected that this adsorbent will have high separation efficiency and a low energy requirement for regeneration.

Based on the knowledge they have gained, the team hopes to develop further induced-fit materials for other types of guest molecules that are difficult to separate.