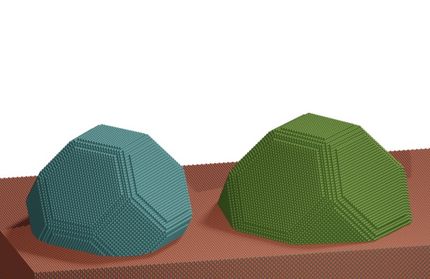 The particle in preferred orientation (right) and the slightly twisted one (left) differ in shape and thus in function.

Nanoparticles that make up catalysts can arrange themselves in slightly different ways, and behave significantly differently as a result. This is revealed by an X-ray study of palladium nanoparticles carried out at DESY Nanolab and PETRA III. The study has been published in the journal ACS Nano and provides systematic insights into the self-organisation of such catalyst particles.

Catalysts often consist of certain metals, such as platinum, rhodium or palladium, which promote the desired chemical reactions without being consumed themselves. The catalytic converters used in the exhaust system of cars, for instance, promote the oxidation of toxic carbon monoxide to carbon dioxide and the reduction of harmful nitrogen oxides. The metals usually take the form of nanoparticles, because these have larger surface areas for a given amount of material.

More active centres of the catalyst nanoparticles are often located at corners and along edges. The shape and size of the particles can therefore have a substantial influence on their function and efficiency. However, scientists are only just beginning to understand exactly how these things are connected and how the structure of the nanoparticles can be controlled.

“In many cases, the exact details of the structure and function of catalysts are still shrouded in mystery,” explains DESY’s Vedran Vonk from the Nanolab. “If we knew the optimal size and shape of a nanoparticle, for example, catalysts could be made significantly better and cheaper. In particular, the role of the particles’ precise orientation on the substrate has scarcely been explored. We assume that around 90 percent of the metal used in present-day catalysts contributes nothing to their functionality.”

For its systematic study, the DESY team grew palladium nanoparticles on a magnesium oxide substrate. “Both these materials are typically found in a range of different catalysts, so the system we studied can serve as a model for numerous applications, including the catalytic converters installed in cars,” points out the lead author Simon Chung from DESY Nanolab. The researchers analysed size and orientation of the resulting nanoparticles using high-intensity X-rays from PETRA III. “It clearly emerges that the nanoparticles have a preferred orientation,” reports Dmitri Novikov, head of the P23 beamline at which the experiment was carried out. “They line up along the crystal lattice of the magnesium oxide substrate and almost all of them grow in a certain direction and to a certain size.” But only almost all of them: about one in a hundred nanoparticles aligns itself at a small angle to the preferred direction.

“That came as a surprise: in addition to the main orientation, there is a second preferred direction, rotated by just 3.7 degrees to the right or left of the main direction,” explains Jan-Christian Schober, who wrote his master's thesis on this topic at the University of Hamburg. “About one percent of the particles adopt this second alignment and their shape is also slightly different.” As a result, the corners and edges with the active centres also differ in the two types of particles, and they behave differently when in operation catalytically.

The team simulated the practical operation by heating the particles to more than 400 degrees Celsius and investigating their shape in oxidation and reduction reactions. During these reactions, the nanoparticles typically change their shape, which in turn means that the active sites shift. The operational data for the two types of nanoparticles differ considerably, but in view of the complexity of their interaction it is not yet possible to give a simple answer as to which type of particle works better.

“If we knew the positions of all the atoms and, in addition, how each individual atom contributes to the catalytic effect, we would be able to tailor the optimal catalyst for every application,” says Vonk. At the moment, that is not possible. A new collaborative research centre called “Tracking the Active Site in Heterogeneous Catalysis for Emission Control” (TrackAct)", involving scientists from DESY and the Karlsruhe Institute of Technology (KIT), wants to explore exactly this question. Studying the palladium nanoparticles is itself the first step along this path. “We assume that on a qualitative level our observations apply quite generally to catalytic nanoparticles on a substrate,” emphasises Vonk.