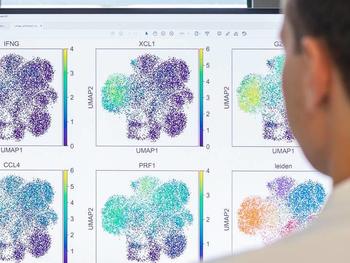 Researchers at the TUM Institute for Medical Microbiology, Immunology and Hygiene have developed a new approach to identify T cells against the corona virus.

T cells play a decisive role in fighting the coronavirus and preventing infected individuals from becoming seriously ill. They identify and fight the virus directly within the infected cells. A team of researchers working in Munich have produced a precise profile of the T cells that respond to SARS-CoV-2 and described them at various stages of the illness. This novel methodological approach may in the future also help to assess the efficacy of SARS-CoV-2 vaccines or in the development of T cell-based treatments for serious cases. It may also offer hope for other illnesses such as cancer or autoimmune diseases.

T cells play an important role in the human immune system. The blood cells classified as lymphocytes are formed in the bone marrow. From there they travel through blood vessels to the thymus gland in the breastbone. They then form receptors on their cellular surface to identify and fight foreign matter. The T cells also stimulate the formation of B cells, which produce antibodies to attack viruses. Virus-specific immune responses by T cells can be detected in the blood months or even years after an infection.

In view of the millions of people infected by Covid-19 and the emerging fourth wave of the pandemic, it is of great interest to learn more about the T cells that fight the virus. The T cells are enormously important for protecting against a SARS-CoV-2 infection or preventing serious illness. “We’re especially interested in how many of these specific T cells are present in the body of an infected person, the qualities that enable these cells to respond to the virus, and how long the T cells last,” says Dr. Kilian Schober of the TUM Institute for Medical Microbiology, Immunology and Hygiene.

An interdisciplinary team of researchers at TUM, Helmholtz Zentrum München and LMU Munich has now succeeded in developing a method for finding the T cell receptors that respond to SARS-CoV-2. The team divided blood samples taken from seriously infected Covid-19 patients into two pools. The samples in the first pool were then stimulated with the virus antigen, with the second pool left untreated. “This enabled us to identify the T cells that responded to the virus and characterize a precise phenotype,” says Dr. Herbert Schiller, group leader at Helmholtz Zentrum München. “So we now have a profile to identify a T cell that fights SARS-CoV-2.”

T cells show whether the infection is still active

The Munich researchers now know what T cells look like that have recently been exposed to the virus-fighting antigen. Similar T cells were found not only in the blood, but also in the respiratory tract of patients. This made it possible to distinguish between cells still in the “hot phase” and those that have become dormant (“cold”) – in other words, whether a patient is still fighting the infection or has already overcome it.

The results of the study are highly significant. They enable us to distinguish between SARS-CoV-2-specific T cells in different organs (blood or lungs), different activation states (antigen seen recently or not) and in different illness contexts (seriously ill/virus positive or mildly ill/virus negative). “We now have a better understanding of the appearance of T cells targeting SARS-CoV-2 and how numerous they are in the blood and respiratory tract,” says Prof. Dirk Busch, the Director of the TUM Institute for Medical Microbiology, Immunology and Hygiene. “In the future, this process can probably also be used to determine how many protective T cells are present after a vaccination.”

Providing T cells with receptors to save seriously ill patients

The team working with lab director Prof. Dirk Busch also succeeded in modifying T cells of healthy individuals to enable a first response to SARS-CoV-2. “That shows that it might be possible to equip the T cells of patients with receptors to fight the virus more effectively,” says Kilian Schober. This is the first step towards an adoptive T cell treatment for seriously ill Covid-19 patients. The process may also be applicable to other diseases through better characterization of T cell responses – an important hope for treatments of autoimmune conditions and cancers.