Bacteria can boost the fitness of their host 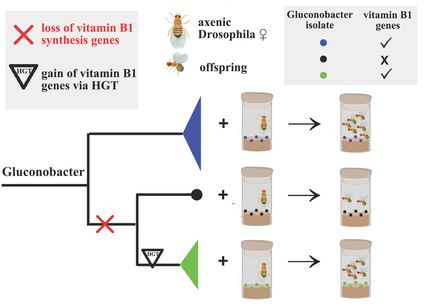 Microorganisms can increase their host’s ability to adapt to the environment and reproduce – evolutionary biologists are now studying the underlying molecular mechanisms. A research team headed by Dr. Fabian Staubach and Yun Wang from the Institute of Biology I at the University of Freiburg has now studied the relationship of Gluconobacter bacteria and Drosophila melanogaster fruit flies. They have found that specific Gluconobacter variants supply the flies with vitamin B1 improving fly fitness. The research involved comparison of different but closely-related strains of Gluconobacter bacteria and the effect they have on fruit flies. Bacteria carrying genes for vitamin B1 production increased fly offspring number. In addition, the researchers discovered that bacteria can pass on the necessary vitamin-producing genes horizontally – that is, not just to their offspring but also to other living bacteria. The microbial genome-wide association study (GWAS) was conducted  together with researchers from the Max Planck Institute for Evolutionary Biology and the University of Wisconsin La Crosse, USA. The results have been published in the journal BMC Biology.

“We want to better understand how microbes influence the fitness of their hosts. Therefore, we are tracing the evolutionary events that lead to changes in the host’s fitness that are mediated by the bacteria,” explains Staubach.

By tracing the evolution of vitamin producing genes, the researchers found that a set of Gluconobacter strains had probably lost the genes back in evolutionary history – but then recovered them through horizontal gene transfer from other bacteria. The researchers discovered this by creating a phylogenetic tree of the bacteria they were studying, which they then used to trace the evolutionary history of the vitamin-producing genes. On one branch of this tree the vitamin-producing genes occurred as a connected block (operon) of genes thatwere very similar to genes from very distantly relatedbacteria. These are  typical footprints of horizontal gene transfer.

Putting it briefly, Staubach says, “Our study underscores the importance of genetic variation between closely-related bacteria for the host and shows that horizontal gene transfer can contribute to the flexibility of the microbiome and possibly to the host’s adaptation to its environment.”