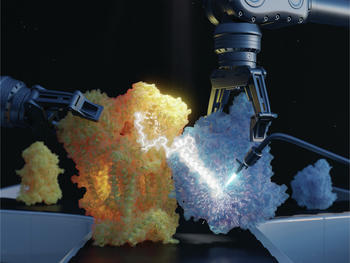 Supercomplex CIII2CIV. When assembled into a supercomplex, the two parts of CIII2CIV are held together by a molecule that acts like a fishhook. This optimizes the cell metabolism.

Severe fatigue, muscle weakness, even blindness – mitochondrial diseases have various symptoms. In fact, the majority of genetic diseases are caused by defects of the mitochondria. Hence, understanding these “power houses” of our cells is crucial for the developments of new treatments. In a study published in the journal Nature, researchers at the Institute of Science and Technology (IST) Austria now show for the first time the structure of a protein complex essential for their work.

In order to fulfill their many tasks, cells need energy. In the cell’s power plants, known as mitochondria, the energy contained in our food is converted into the molecule ATP. It serves as a kind of fuel that drives most cellular processes – from muscle contraction to the assembly of our DNA. Professor Leonid Sazanov and Irene Vercellino are now the first scientists to precisely show what a protein assembly essential for this process looks like in mammalian cells.

Using cryo-electron microscopy, a technique that allows researchers to look at extremely small samples in their natural state, first author Irene Vercellino and Prof. Sazanov show the exact structure of the so-called supercomplex CIII2CIV. This assembly of protein building blocks pumps charged particles, protons, through the mitochondrial membrane, which is needed to start the energy conversion process in the cells. It therefore fulfills a similar task as the starter battery of cars. Up to now, this supercomplex has only been described in plant and yeast cells where it takes on a very different form, as the researchers now discovered. In order to understand how exactly energy production works in animal cells like our own, the scientists now took a close look at mice and sheep cells and were surprised.

“Nobody could have predicted the way SCAF1 acts,” says Sazanov. Previous studies already showed that the molecule SCAF1 plays a role in assembling the two protein complexes that together form supercomplex CIII2CIV. Instead of interacting with the two protein complexes on the surface only, the molecule goes deep inside complex III while being attached to complex IV. “It is like a hook swallowed by a fish. Once it’s swallowed it can’t get out,” the structural biologist explains.

Close, but not too close

Furthermore, the scientists show that supercomplex CIII2CIV takes on two different forms – a locked and an unlocked or mature one. “In its locked state some parts of complex III are still missing and the interaction between the two complexes is very intimate,” describes Sazanov. Once it is fully assembled, however, the two complexes are connected by SCAF1 without getting in each other’s way. “In order to fulfill its tasks, complex III probably prefers to be free from interference in its movements,” the Belarusian-British scientist assumes.

Being assembled into a supercomplex, on the other hand, speeds up their chemical reactions, which has great advantages for the animal.  It has been shown, that mice and zebrafish missing the SCAF1 molecule are significantly smaller, less fit, and less fertile. In their recent study, Vercellino and Sazanov describe the molecule’s role in forming supercomplex CIII2CIV, which optimizes the cellular metabolism. It has been the final piece of the puzzle: together with their previous studies, Sazanov and his team now determined the structures of all supercomplexes in mammalian mitochondria. The team is thus laying the foundation for new treatments for mitochondrial disease.