Protection against the consequences of heart attacks 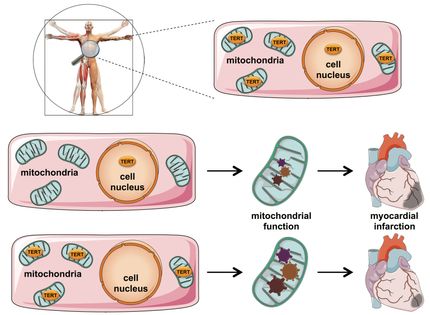 The aging researchers Prof. Judith Haendeler from the Medical Faculty and the molecular biologist Prof. Joachim Altschmied from the Department of Biology together with their teams have shown for the first time in the cardiovascular system that Telomerase Reverse Transcriptase (TERT) within the mitochondria, the powerhouses of the cells, has a protective function in myocardial infarction. This work, which was performed together with other groups from the University Hospital Düsseldorf and the University Hospital Essen within the frame of the Collaborative Research Center 1116, was recently published in the journal “Circulation".

In the cell nucleus, TERT is a component of the so-called "immortality enzyme" Telomerase, for the discovery of which the Nobel Prize in Physiology or Medicine was awarded in 2009. Meanwhile, it has been shown by the two research groups at HHU, that TERT is also present in mitochondria in the cells of the cardiovascular system. However, until now it has not been possible to clearly distinguish between its functions in these two cell organelles.

For this purpose, Prof. Haendeler and Prof. Altschmied have generated worldwide unique mouse models in which the protein is present in all body cells either exclusively in the nucleus or in the mitochondria. WIth these they were able to demonstrate that mitochondrial, but not nuclear TERT improves mitochondrial function in the heart and reduces the damaged area after a heart attack. This is also reflected in the recovery of cardiac function after infarction. Cardiac muscle cells benefit from the increased mitochondrial function and are protected from cell death. Other cell types also profit from increased mitochondrial function such as fibroblasts, which are essential for stable scarring after an infarction, and endothelial cells, which are needed for vascularization and thus blood supply in the infarct area.

Based on these findings, therapies that increase the amount of TERT in mitochondria appear to be useful in achieving a better healing process after a heart attack. Such an effect occurred in heart tissue of bypass patients after a pressure cuff therapy during which a conventional blood pressure cuff placed on the patient's upper arm is inflated several times in a specific rhythm, which improves mitochondrial functions. First cell culture experiments indicate that an increase in mitochondrial TERT levels can also be achieved by using a plant substance approved as a dietary supplement.