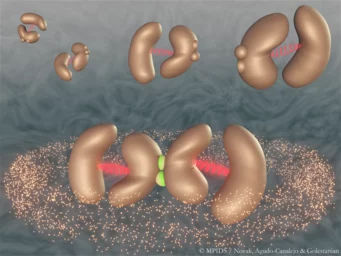 When two enzymes are mechanically coupled to each other, they can synchronize and greatly boost their catalytic activity. In this artistic rendition, each enzyme is composed of two subunits joined together by a flexible linker (red), and two enzymes can attach to each other (green) to form a mechanically-coupled complex

Mechanically coupled enzymes show an increase in their catalytic efficiency – this is the result from a study by the group of Ramin Golestanian and Jaime Agudo-Canalejo from the Max Planck Institute for Dynamics and Self-Organization. The researchers concluded that enzymes can benefit from cooperation and avoid the activation energy required for individual enzymes. This way, two enzymes can work hand-in-hand to achieve an overall faster turnover of a chemical reaction.

It is known that, in biological systems, enzymes aggregate together in clusters which support the catalytic activity of these essential molecules. The close proximity between different enzymes has generally been assumed to be beneficial: if the product molecule from the reaction catalyzed by one enzyme is subsequently used in the reaction catalyzed by a different kind of enzyme, resulting in enzymes ‘handing over’ molecules from one to another. However, an increase in efficiency has also been observed when enzymes of the same kind, which are catalyzing the same reaction, cluster together. Up to now, the advantage of this organization was not understood, but the new study shows that proximity between identical enzymes can lead to a substantial improvement in their catalytic efficiency.

“We have shown that mechanical coupling between nearby enzymes can cause them to synchronize, and at the same time to boost their catalytic activity” says Jaime Agudo-Canalejo, first author of the study. He explains: “In fact, what would normally be a single catalytic event for an isolated enzyme becomes a burst of many catalytic events when two enzymes interact with each other.”

A common principle in biology

There are several other examples for synchronization in a biological context. One prominent example are cilia which are beating in a coordinated and periodical manner to enable lateral transport. Likewise, cardiac cells follow a synchronous pattern to ensure a periodic beating of the heart.

Along the same lines, general enzymatic activity was now described to benefit from mutual synchronization: “It is very exciting to learn that enzymes have evolved to take advantage of such sophisticated strategies to function cooperatively and efficiently at the molecular scale. This mechanism may be advantageous in signaling processes that require a coordinated response to an external input. Moreover, a boost in catalysis should have important consequences in the cellular metabolism” explains Ramin Golestanian, principal investigator of the study and director at the MPIDS.

New physics at the molecular scale

The mechanism for synchronization unveiled in this work involves enzymes that undergo small changes in shape during a catalytic step. When two such enzymes are close by, either directly attached to each other or interacting indirectly through the surrounding physical medium (for example a cellular membrane), expansion of one enzyme will cause contraction of the other. This way, they take turns in driving each other through their catalytic cycle. According to the model, this can create a long burst of catalytic activity, which will last until a thermal fluctuation eventually pauses the overall catalytic activity of the enzyme complex. Moreover, the onset of the cooperativity is achieved through a topological transition, which makes the phenomenon particularly fascinating at a more fundamental level.

“The mechanism which we uncovered in this molecular-scale system represents a novel kind of synchronization mechanism, which is qualitatively different from those present in previously-studied larger-scale systems” concludes Ramin Golestanian. “The model thus opens a plethora of new avenues for research in the field.”