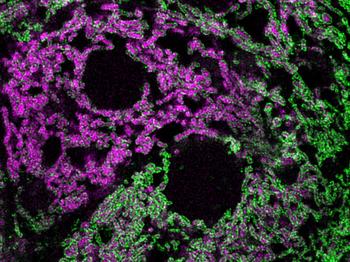 Mitochondria are considered the power plants of cells because they generate energy from our food with the help of oxygen. The machinery required for this is called the respiratory chain. Its central building blocks are formed by mitochondria themselves through the expression of genes of their own genetic material. Malfunctions in gene expression can cause an imbalance of energy production thus leading to severe and often fatal diseases of the nervous and cardiac system. Mechanisms of gene expression in mitochondria are still poorly understood.

A team of scientists led by Prof. Dr. Peter Rehling, Director of the Institute of Cellular Biochemistry at the University Medical Center Göttingen (UMG), speaker of the Collaborative Research Center SFB1190, and member of the Göttingen Cluster of Excellence "Multiscale Bioimaging: From Molecular Machines to Networks of Excitable Cells" (MBExC) are now one step further. They have developed a completely new strategy that, for the first time, enables to experimentally alter protein formation in mitochondria. The knowledge thus gained also allows conclusions to be drawn about the development of "mitochondrial diseases". The technique was recently published in the journal "Cell".

In the process of mitochondrial gene expression, multiple factors regulate the formation of proteins (translation) for the respiratory chain. Disturbances in this process are associated with a variety of diseases, including cardiovascular disease and nervous system disorders. "In order to develop approaches to prevent disease-relevant disorders, we must first understand the molecular mechanisms of gene expression in mitochondria. Therefore, reductionist approaches are indispensable tools", says Prof. Rehling, senior author of the study. "They allow us to dissect biological processes at different levels and in this way study the function of individual components involved." Such experimental strategies have been lacking until now. A major obstacle to their development lies in the fact that mitochondria are not readily genetically accessible. To solve this problem, the scientists have developed a completely new strategy that enables them to specifically modify translation in purified mitochondria. By using minute amounts of a modified mitochondrial precursor protein, which they efficiently introduce into purified human mitochondria, they are now able to prevent the formation of individual proteins in the mitochondria. "This in vitro system now allows us to study how the loss of expression of a single mRNA affects the physiology and organization of mitochondria, with minimal indirect impact on other processes," says Dr. Luis Daniel Cruz-Zaragoza, scientist at the Department of Cellular Biochemistry, UMG, and first author of the study. Moreover, the scientists were able to easily transfer the technique to purified mitochondria from mice, indicating that it is also applicable in the context of studying disease models. This new experimental strategy is thus also relevant for clinical research, since disorders in mitochondrial gene expression can result in severe diseases of the nervous system and heart, which are often fatal.