A high technology standard is key 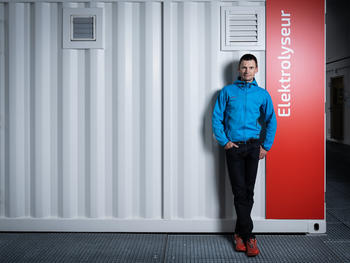 At the Paul Scherrer Institute, Christian Bauer researches how efficiently different energy sources can be used for a sustainable energy supply.

An international group of researchers led by the Paul Scherrer Institute and the Heriot-Watt University has carried out in-depth analyses of the climate impact of blue hydrogen. This is produced from natural gas, with the CO2 resulting from the process captured and stored. The study, published in the Royal Society of Chemistry’s journal Sustainable Energy & Fuels, concludes that blue hydrogen can play a positive role in the energy transition – under certain conditions.

Hydrogen is an energy carrier of the future: water is the only by-product from its use, whether it be to power a car or to generate heat for homes and industry. In fact the method used to produce the hydrogen is what determines its environmental performance. The optimal form is green hydrogen, produced by the electrolysis of water. For hydrogen to be green indeed, the electricity used in this process must come from renewable sources, such as hydro, wind or solar power, which makes it virtually carbon neutral. At the moment, however, hydrogen produced in this way is expensive and not universally available - due to the lack of renewable electricity and electrolysis capacities.

"Booming demand for hydrogen can probably not be satisfied for the foreseeable future," reads the conclusion of the current international study. Today, most hydrogen is produced from natural gas or other fossil fuels. This is referred to as “grey hydrogen” and does not benefit the environmental performance, as its production has a negative climate impact and energy is lost during conversion.

Blue hydrogen offers something of a compromise and its role in the energy transition has been more widely discussed in recent months by experts and policymakers. Like grey hydrogen, it is also produced from natural gas using a process known as steam reforming, which heats and then splits the gas into hydrogen and carbon dioxide. In this case, however, the CO2 is not allowed to simply escape into the atmosphere, but some of it is captured and stored permanently underground in order to reduce the greenhouse gas effect. This process is known as carbon capture and storage (CCS) and helps improve the environmental balance.

Leaks weaken the benefit for the climate

A joint study published last August by researchers at the US universities of Cornell and Stanford came to the conclusion, however, that even when CSS is used, blue hydrogen for heat generation is not better for the climate, but overall can be well over 20 percent worse than using natural gas directly as an energy carrier. The main reason, according to the authors, was the leakage of natural gas into the atmosphere along the entire supply chain – from its production at the borehole through to transport by pipeline or ship, then on to the hydrogen production plant. Since the greenhouse gas effect of natural gas, or rather its main component methane, is around 30 times stronger than CO2, even leakage of a few percent can severely weaken the climate balance of the hydrogen produced. In addition, the steam reforming of natural gas produces CO2 emissions if not all the carbon dioxide is captured, allowing some of it to escape into the atmosphere rather than being stored underground.

"This study gave us the chance to study the climate impact of blue hydrogen in much greater depth," says Christian Bauer from PSI’s Laboratory for Energy Systems Analysis, the lead author of the current study. Within short time, Bauer together with Mijndert van der Spek, Professor at the Research Centre for Carbon Solutions at Heriot-Watt University, formed an international collaboration of researchers from different institutes in order to give the new study a broader base. Collaboration with colleagues at ETH Zurich was particularly close, as they have special models for detailed simulation of processes such as carbon capture. "They used their simulation software to model the production of blue hydrogen, then at PSI we fed the results into our environmental performance models," Bauer reports. "So we were able to replicate the entire production chain, from natural gas extraction to carbon capture and storage."

The evaluation of climate impacts shows a nuanced picture: whether blue hydrogen actually benefits the climate depends to a large extent on how much methane is lost on the way from the point of extraction to hydrogen production, and how effectively carbon is captured during the steam reforming of the natural gas. "The methane emissions are very diffuse, as they can occur at many different points along the production chain," Bauer explains, making them hard to identify. Depending on the production technology and the country of extraction, emissions can vary between a few tenths of a percent to several percent. And when it comes to capturing the carbon dioxide, some methods are able to trap and store almost all the CO2, while others only manage around fifty percent. "With modern CO2 capture technologies, virtually all the CO2 produced in hydrogen production can be captured," says van der Spek. This means that blue hydrogen can play a key role in the transition to a carbon-neutral society.

A high technology standard is key

The key to generating blue hydrogen in the most climate-friendly way is therefore to ensure a high standard of technology. "Countries such as Norway are good role models," Bauer says. They are already able to extract and transport the natural gas with virtually no losses and emissions of less than 0.5 percent. If almost all the CO2 emissions are captured during the steam reforming process and stored underground in former natural gas fields in the North Sea, for example – a solution already proven to be safe and effective over many years – then this form of blue hydrogen is almost as climate friendly as the green form.

The PSI scientist stresses that his American colleagues did not necessarily miscalculate. "But they only studied the negative side of the spectrum when investigating the production of blue hydrogen. By contrast, we were able to show that if managed correctly, this type of hydrogen can make a valuable contribution towards the energy transition." It could at least be a type of interim solution until green hydrogen is widely and cheaply available. "Continuously growing demand may require both types of hydrogen to be used to complement each other over an extended period," according to Bauer.

The natural gas industry has already recognised that only production with the lowest emissions possible can secure its survival. It has set itself the goal of improving the technology in global use to such a high standard that methane emissions do not exceed 0.2 percent. Political discussions are focusing on threshold values that would allow blue hydrogen to qualify as a low-carbon, environmentally friendly fuel source. "It is important here that such an emissions threshold really takes into account the entire production chain," Bauer cautions. Critical factors must not be concealed when assessing the climate balance.