Harnessing the organisation of the cell surface 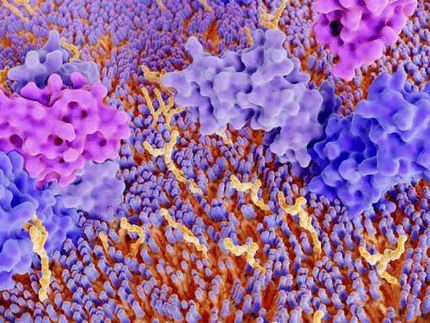 Scientists at ETH Zurich have developed a new method to determine how proteins are organised on the surface of cells. Insights gained with the technology could lead to the development of novel drugs to fight cancer.

Biological cells have multiple functions, and they need to communicate with each other to coordinate them. Molecules on the cell surface are central to this process. For decades, biologists have been studying such surface proteins and it is becoming increasingly clear that not only their presence but also their organisation on the cell’s surface is crucial to the function of a cell.

“Proteins aren’t simply distributed evenly and independently of one another across the cell’s surface; instead, they’re organised into molecular communities. In these communities, proteins often work together to fulfil cellular functions,” explains Bernd Wollscheid, Professor at ETH Zurich’s Institute of Translational Medicine. Together with a large interdisciplinary team that includes further researchers from ETH Zurich and other institutions, Wollscheid’s doctoral student Maik Müller has now developed a technology that can be used to discover the organisation of cell surface molecules.

Who got a kiss?

With this technology called LUX-​MS, the researchers can determine with nanometer-​scale precision how proteins integrate into an organisation on the cell surface – in other words, which proteins are in proximity to each other. So far, scientists were able to measure interactions of individual proteins that have a high affinity for each other, as well as for molecules that reside inside the cell. However, the new method is the first to enable scientists to specifically detect the organisation of the entirety of cell surface molecules. Wollscheid refers to this entirety as the “surfaceome”. The term is composed of the word “surface” and the suffix “-​ome”, that is also used in terms such as genome or proteome.

With a twinkle in his eye, Wollscheid explains the principle behind the method as follows: “We specifically modify a particular surface molecule so that it likes to ‘give kisses’ to molecules in its proximity, and then we check the other surface molecules for traces of lipstick.” In more technical terms, a small chemical compound is attached to a protein of interest. When irradiated with light, this compound produces small amounts of what are known as reactive oxygen molecules, that oxidise surface proteins in the immediate vicinity. Using a specific enrichment method and mass spectrometry in combination with statistical data analysis, the scientists can ultimately identify which molecules have been oxidised.

To determine the distance between the protein of interest and the other molecules, the researchers repeat their experiments under slightly modified conditions that affect the amount and survival time of the reactive oxygen molecules. These include the length of irradiation with light and the choice of medium in which the cells are cultured. The more reactive oxygen is locally generated and the longer that process continues, the wider the area in which surface molecules get oxidised.

Drugs that are better at targeting cancer

Wollscheid and his colleagues will now use the technology to compare cells from healthy and diseased people. “We’re trying to understand how a disease changes the organisation of proteins at the cellular level – for example, when a healthy cell transforms into a cancer cell,” Wollscheid says. The scientists are in the process of creating a reference map of healthy cells. They then plan to use it to identify differences in the organisation of protein communities on the surface of diseased cells.

Knowing which molecules exist on cell surfaces and how they are organised could become significant in areas such as the development of novel drugs to fight cancer. Modern cancer drugs employ a cell-​killing agent is often coupled to an antibody that recognises a surface molecule that is present in large quantities on cancer cells. This means the cancer cells are killed with a reasonable degree of specificity. However, many cancer-​specific surface molecules are also found on healthy cells, albeit at lower concentrations, provoking these drugs to also kill some healthy cells.

If two molecules were found to be adjacent only on a diseased but not on a healthy cell, drugs could be developed that recognise these two molecules together. The drug would then kill a cell only if both molecules were present on the cell and adjacent to each other. This is precisely the information that the new technology provides.

A wide range of applications

In the published work, the scientists showed that the scope for using this method goes beyond the investigations of which cell surface molecules are next to each other. They also tagged viruses and drugs with the small chemical compound that produces reactive oxygen. This allows the researchers to study the binding events of viruses or drugs to cells. Furthermore, the method makes it possible to investigate which protein communities are involved in the interaction between two different cells. The scientists demonstrated this using the example of communication between immune cells. "In this way, the new method can help to understand how drugs work and how viruses or immune cells recognise other cells," says ETH doctoral student Müller. "The method is therefore of great benefit for research at universities and in industry."

Müller and Wollscheid developed and tested the new method in an interdisciplinary collaboration including ETH Zurich Professors Martin Loessner, Annette Oxenius, Jeffrey Bode, Erick Carreira and Berend Snijder. Researchers from the University of Zurich, the University of Michigan and an American drug development company also contributed to the study, which was published in the journal Nature Communications. The scientists have transferred the new technology to a spin-​off company, which now plans to use the technology to develop new drugs against not only individual surface proteins but entire protein communities.