Controlling the metabolism of cancer cells 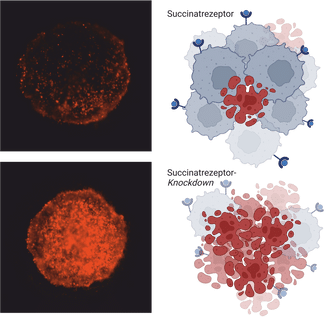 With their altered metabolism, cancer cells grow faster than normal cells. Scientists at Leipzig University’s Faculty of Medicine have now discovered that cancer cells need the succinate receptor to control their metabolic rate. This knowledge should in future help doctors to develop treatments.

Cancer cells show unchecked rapid growth beyond tissue boundaries that is no longer stopped by normal control mechanisms. Due to this rapid growth, the metabolism of cancer cells is altered compared to that of cells that grow normally. Cancer cells use this metabolism to provide molecular building blocks and to meet their high energy needs. It has also been known for some time that metabolic intermediates activate specific receptors on the surface of cells. One such metabolite is succinate, which specifically activates a receptor found in various types of tumour.

Until now, there has been little research into whether and how this receptor influences the metabolism, and thus also the survival, of cancer cells. Scientists at Leipzig University have now discovered that cancer cells need the succinate receptor to control their metabolic rate, i.e. the consumption of oxygen and the production of energy. “Without the succinate receptor, cancer cells die because they lose control over central cellular metabolic pathways,” explained study head Dr Claudia Stäubert from the Rudolf Schönheimer Institute of Biochemistry.

One of the characteristic changes in the metabolism of cancer cells is known as glutaminolysis – a dependence on the amino acid glutamine for energy production. By combining metabolic analyses with image-based studies to monitor cancer cell survival, the Leipzig-based scientists were able to show that cancer cells that exhibit such a dependence on glutamine depend on the function of the succinate receptor for their survival. “Knockdown of the receptor caused increased death of cancer cells. This was also detectable in combination with known therapeutics,” said Dr Stäubert.

The succinate receptor therefore represents a potential target for the development of chemotherapeutic agents for cancer treatment. Further research will need to identify relevant pharmacological inhibitors of the receptor and evaluate their potential as drugs in cancer therapy.