Stem cells organize themselves into embryoid 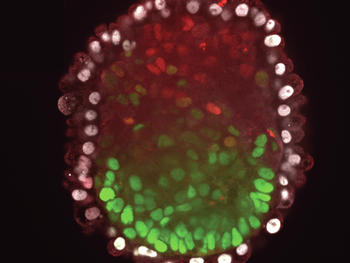 Researchers at the University of Bonn have developed a method to generate embryo-like cell complexes from the stem cells of mice. The method provides new insights into embryonic development. In the medium term, it might also be suitable for developing tests for substances that could be harmful to fertility. The study is published in the prestigious journal Nature Communications.

It is still not fully understood how a mouse, a dog or a human being develops from a fertilized egg cell. The egg cell is capable of forming every type of tissue in the organism, whether it is bone, skin, muscle or the brain. Its daughter cells are genetically identical to it; so in principle they should be able to do the same. But in these cells, certain programs in the genetic material are activated very early on, which irreversibly determines their course of development.

This process must be coordinated down to the smallest detail. After all, this is the only way to ensure that the eyes form at the appropriate location on the face, while other cells very close by develop into the nasal cartilage. Surprisingly, however, there is no conductor wielding the baton. "Embryo development is largely based on self-organization," explains Prof. Dr. Hubert Schorle of the Institute of Pathology at the University of Bonn. "Each cell releases messenger substances into its environment and thereby helps determine the fate of its neighbors." It is as if in an orchestra everyone only pays attention to what the musicians around them are playing. And yet this would not result in a cacophony, but in Beethoven's Ninth Symphony.

The current study allows new insights into these precisely coordinated processes. The researchers from Bonn succeeded in maturing embryonic stem cells (ES cells) from mice into a so-called embryoid. ES cells are pluripotent; different tissue types can form from them. Unlike omnipotent fertilized eggs, however, they are not all-rounders - so they no longer have every career open to them. "In addition to the actual embryo, the membrane that surrounds it and parts of the placenta also emerge from the egg," Schorle explains. "ES cells, on the other hand, cannot form these tissue structures outside the embryo."

However, they apparently play a decisive role in embryonic development: If ES cells are stimulated to divide, they merely turn into an undifferentiated cluster of cells. "We have now genetically modified some of the ES cells in our study," explains Schorle's colleague Jan Langkabel. He performed the main experiments in the study together with Arik Horne from Prof. Dr. Joachim Schultze's research group at the German Center for Neurodegenerative Diseases (DZNE) and the LIMES Institute at the University of Bonn. "Some ES cells were then able to form the membrane and others the embryonic portion of the placenta."

When the researchers brought these two modified cell lines together with the original ES cells, they observed something astonishing: The mouse cells differentiated in a finely balanced manner, eventually producing an embryo-like complex - an embryoid. "This resembled a 5-day-old mouse embryo," Horne says. "The disordered mixture of the three cell types had therefore evolved into a strictly ordered structure, much like the one that normally emerges from a fertilized egg." Studies of their gene activity confirmed this finding: Each individual cell of the embryoid behaved very similarly to its counterpart in a real embryo.

It was already possible to create such embryoids before. However, this required the use of three completely different cell lines, which were grown separately in a strictly coordinated manner. This approach is very complex and error-prone - unlike the new method: "We work with a single culture," stresses Schorle, who, like Prof. Schultze, is a member of the Transdisciplinary Research Area (TRA) "Life and Health" at the University of Bonn. "We then switch on the placenta program after a certain time in one part of the cells and the membrane program in another part. The rest then happens, as it were, by itself through self-organization."

Prof. Schorle is now planning to create such embryoids from ES cells of monkeys in a very similar way. These could then be used for toxicity tests, he says - for example, to determine whether certain substances cause malformations in the womb. This currently relies on animal testing. "The use of such embryoids could replace at least some of these," notes the researcher. He is already planning a corresponding cooperation project with researchers at the University of Göttingen.