Taking Microbes Out of Dark and Into the Light 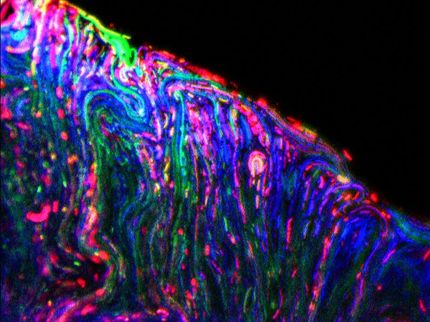 Microorganisms feel at ease in biofilms. In the microscope image, they are marked in different colors.

Microorganisms are the oldest, most abundant, and most diverse life forms on earth and offer enormous potential for biotechnological applications. To date, however, only a fraction of them could be isolated and cultivated. The “MicroMATRIX” research project, funded with EUR 1.5 million by the German Federal Ministry of Education and Research and led by Karlsruhe Institute of Technology (KIT), aims to shed more light on the microbial darkness by developing a cultivation pipeline from environmental samples for microorganisms with biotechnological relevance that could not be cultivated before.

“Microorganisms are the catalysts of a biobased industry and play a central role in many biotechnological processes. The development of our society towards a sustainable bioeconomy makes it necessary to complement and replace established procedures by biotechnological processes,” says Dr. Kersten Rabe from KIT's Institute for Biological Interfaces 1, who coordinates the MicroMATRIX project. “In addition, novel biobased materials can be developed based on biological systems. For example, this may be an option to remedy the lack of new therapeutics in health research,” emphasizes Rabe.

Still Many White Spots on the Map of the Microbial World

Despite their great importance, microorganisms are still completely under-researched and under-utilized today. It is estimated that 99 percent of all microbial species could neither be isolated nor cultivated until now because they are part of multi-species consortia and are often found in biofilms in nature. In these, many microorganisms live in communities and form slime layers, such as those found on under-water rocks. They produce a surrounding “matrix” which, in addition to the exchange of nutrients and messenger substances, plays a major role for the structure of these “residential communities.” The project team's goal is to imitate these factors technically. In this way, biotechnologically promising microorganisms that were hitherto uncultivable will be propagated in the laboratory, characterized, and made technologically usable in the long term.

The MicroMATRIX project brings together experts from research and industry in the fields of bioinformatics, micro- and molecular biology, engineering sciences, and chemistry who are working together to develop the necessary technologies and procedures over the next three years. This involves analyzing the genetic information of an environmental mixture of microorganisms to identify individual microorganisms of biotechnological interest and predict the best conditions for their growth. “In particular, the rapidly evolving methods of genome analysis, for example single-cell genomics, help us to explore the ‘dark matter’ in the world of microorganisms,” emphasizes Professor Anne-Kristin Kaster, Director at KIT’s Institute for Biological Interfaces 5, who is a member of the project team charged with bioinformatic identification and targeted sorting of organisms. The goal is fluorescence-based marking of the targeted organism so that they can be isolated from the rest of the “community”. The marked organisms are then deposited in a special incubation chamber where they can grow under perfect conditions.

The German Federal Ministry of Education and Research (BMBF) is funding the MicroMATRIX project (stands for Microbial cultivation based on Meta-omics Assisted, Targeted soRting and Isolation in a customized matriX) with EUR 1.5 million over three years. KIT institutes involved in the project are the Institutes for Biological Interfaces 1 and 5 and the Institute for Applied Biosciences. Other partners are Hamburg University of Technology, the University of Tübingen, and Cytena, a company based in Freiburg. The project started in June.