Damage to this biological security system is detrimental to cells, and has been associated with cancer and neurodegenerative diseases 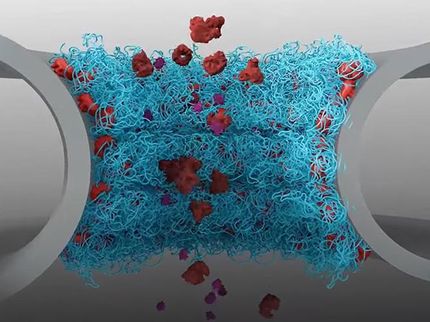 Illustration of the nuclear pore.

The nucleus is guarded by a highly secure door, the so-called nuclear pore, that controls the transport of substances from the cytoplasm to the cell nucleus and back. A research group at the University of Basel has now shown that different shuttle proteins occupy the nuclear pore to prevent unsolicited leakage of molecules. These proteins form an escape-proof, failsafe mechanism by compensating for one another to fortify the pore.

The nuclear pore is responsible for regulating the transport of proteins from the cytoplasm into the cell nucleus and for ushering RNA out of it. It works like a molecular sieve that controls the entry and exit of cargo-carrying shuttle proteins. The molecular sieve interacts with shuttle proteins, which, like gatekeepers, decide which proteins are allowed to enter and which are not.

Professor Roderick Lim from the Biozentrum of the University of Basel aims to resolve this enigmatic selective transport system. His team, in collaboration with the Swiss Nanoscience Institute, has now examined three prominent shuttle proteins in human cells and uncovered that their crowding at nuclear pores is important for preventing unwanted leakage into and out of the nucleus.

The number of shuttle proteins that occupy the pore depends on their concentrations within the cell. However, when one shuttle protein is reduced, another shuttle protein can take its place to reinforce the pore. The results of this novel compensation mechanism have now been published in the Journal of Cell Biology.

"It turns out that the shuttle proteins, although they are from the same receptor family, differ in function in terms of the cargo they carry, localization and concentration," says Dr. Joanna Kalita, first author of the study. The shuttle proteins, which act like gatekeepers at the nuclear pore and decide which cargoes are allowed to enter the cell nucleus and which have to be escorted out, reside in the nuclear pore at varying amounts – depending on their respective concentrations.

Damage to this biological security system is detrimental to cells, and has been associated with cancer and neurodegenerative diseases. Viruses that infect cells, such as SARS-CoV-2, can also trap these shuttle proteins away from the nuclear pore to impair its functionality. "This can lead to defects in the nuclear pore and as a consequence, undesirable substances can freely penetrate the nuclear pores and ‘poison’ the nucleus.

Conversely, substances important for the cell nucleus are no longer imported. Clearly, deeper insights into nuclear pore function will be important for understanding the causes and consequences of defective nuclear transport with respect to disease," explains Lim.