COVID-19: Breakthrough infection can substitute for a third vaccine shot

According to the study, this is possible in three constellations 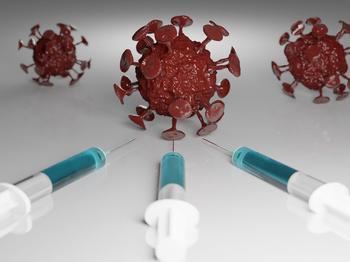 According to a new study led by Ulrike Protzer, a breakthrough infection after two vaccinations achieves the same protective effect as an additional booster vaccination. According to the study by Helmholtz Munich, LMU and TUM, the decisive factor for immunity is that the immune system has had three contacts with the viral spike protein. Only in this way can it produce sufficient high-quality antibodies to arm the body against future variants.

Since the beginning of the COVID-19 pandemic, the SARS-CoV-2 coronavirus continues to change. New worrying variants are spreading rapidly: a challenge for physicians, as the question remains how to best protect people against infections with future virus variants.

Answers to this question have been found by a team led by Ulrike Protzer (Institute of Virology at Helmholtz Munich and the Technical University of Munich), Percy Knolle (University Hospital rechts der Isar of the Technical University of Munich), and Oliver T. Keppler (Max von Pettenkofer Institute and Gene Center Munich at LMU) working together within the German Center for Infection Research (DZIF). As they report in their new study, a total of three exposures is required to the spike protein as a viral antigen so that neutralizing antibodies form not only in sufficient quantity, but also in high quality. According to the study, this is possible in three constellations: after triple vaccination (basic immunization and booster), after infection and double vaccination, and after two vaccinations and a breakthrough infection.

“Our study shows that triple-vaccinated individuals with no previous SARS-CoV-2 infection have almost the same amount of neutralizing antibodies as convalescents getting vaccinated or vaccinated individuals who had a breakthrough infection,” explains Ulrike Protzer. “Thus, we now know that while immunity built up or enhanced by vaccination is the most important key to effective protection against future variants of the virus, a breakthrough infection, as irritating as it may be, can provide the effect of an additional vaccine shot.”

Since the beginning of the pandemic, 171 voluntary participants from the staff at the University Hospital rechts der Isar at risk of infection were recruited for the study and regularly tested. The researchers identified one group of people who had contracted SARS-CoV-2 during the first wave of the pandemic in spring 2020, and a second group who had not been infected. Both groups were comparable in relation to their sex, age, working conditions, and other risk factors. Subsequently, both groups were offered vaccination with the mRNA-based Covid-19 vaccine from BioNTech/Pfizer and were monitored for almost two years. The cohort comprised 98 recovered persons and 73 persons without prior infection. The researchers defined several parameters in the blood of study participants: the amount of antibodies (IgG), the binding strength of the antibodies to the virus protein, and the ability of the blood serum to neutralize SARS-CoV-2 variants in cell culture. For estimating the extent of protective immunity, the latter two parameters are particularly important.