Creating a sponge-like hole structure on the nanometre scale that allows small molecules to pass through, record-breaking chemical reactivity was achieved 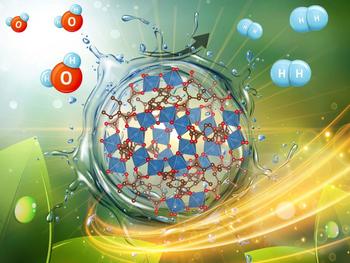 Artist's impression of the catalytic process

Catalysts are often solid materials whose surface comes into contact with gases or liquids, thereby enabling certain chemical reactions. However, this means that any atoms of the catalyst that are not on the surface serve no real purpose. Therefore, it is important to produce extremely porous materials, with as large a surface area as possible per gram of catalyst material.

Scientists at TU Wien (Vienna), together with other research groups, have now developed a new method to produce highly active sponge-like structures with porosity on the nanometre scale. The decisive breakthrough was achieved through a two-step process: metal-organic frameworks (MOFs) are used, which already contain many tiny holes. Then, a different kind of holes is created – these artificial holes serve as a high-speed path for molecules. This made it possible to break previous activity records in the splitting of water into hydrogen and oxygen. The results have now been published in the journal Nature Communications.

A Sponge on the nanometer scale

“Metal-organic frameworks are an exciting class of multifunctional materials”, says Shaghayegh Naghdi, the lead author of the study. “They are composed of tiny metal-oxygen clusters that are linked with small organic molecules into highly porous hybrid networks. Outside we see a solid material, however, on the nanoscale it has a lot of open space that offers the largest known specific surface areas of up to 7000 m2 per gram.”

These characteristics commend MOFs for use in gas separation and storage, water purification, and drug delivery. In addition, the atomic-scale proximity of molecular compounds with distinct chemical, electronic and optical properties makes them also promising candidates for photo- and electrocatalysis.

A new kind of holes

“Up until now, the biggest problem was that the diameter of the intrinsic pores is too small for an efficient catalytic turnover”, says Professor Dominik Eder. “We are talking about very long and extremely small pores of 0.5 to 1 nm in diameter, which is about the size of many small molecules. It takes some time for reactant molecules to reach the active sites inside the MOFs, which slows down the catalytic reaction considerably.”

To overcome this limitation, the group developed a method that takes advantage of the structural flexibility of MOFs. “We incorporated two structurally similar, but chemically different organic linkers to create mixed-ligand frameworks”, explains Dr. Alexey Cherevan. “Due to the different thermal stability of the two ligands, we were able to remove one of the ligands in a very selective fashion through a process called thermolysis” says Shaghayegh Naghdi. That way, additional kinds of pores with a diameter of up to 10 nanometers can be added. The original nanopores of the material are supplemented by interconnected “fracture-type” pores, which can act as a high-speed connection for molecules through the material.

The group at IMC has teamed up with colleagues from the University of Vienna and Technion in Israel and used a plethora of cutting-edge experimental and theoretical techniques to fully characterize the new materials, which were also tested for photocatalytic H2 evolution. The introduction of fracture-type pores could increase the catalytic activity by a staggering 6 times, which places these MOFs top among the currently best photocatalysts for hydrogen production.

The greatest benefits introducing larger pores are expected in liquid-phase applications, particularly involving the adsorption, storage and conversion or larger molecules, such as for example in the fields of drug delivery and wastewater treatment.

This new process also provides additional benefits for photo/electrocatalytic applications: “The selective removal of ligands introduces unsaturated metal sites that can serve as additional catalytic reaction centers or adsorption sites. We expect that these sites will affect the reaction mechanism and thus the product selectivity of more complex catalytic processes”, explains Prof. Eder. The team is currently testing this hypothesis with MOFs for the photocatalytic conversion of CO2 into sustainable fuels and commodity chemicals. There is also an interest from the chemical industry in these catalysts for aiding a potential replacement of energy-demanding thermal catalytic processes with greener photocatalytic processes at low temperatures and ambient conditions.

The new method is highly versatile and can be applied to a variety of MOF structures and applications. “Since we currently know of about 99.000 synthesized MOFs and MOF-type structures”, says Shaghayegh Naghdi, “there is actually a lot of work waiting for us in the future.”