Work marks an especially large breakthrough, since CO₂ is used to carry out a traditionally difficult type of transformation with unprecedented efficiency 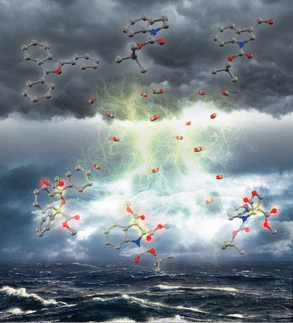 Artistic depiction of electricity enabling the addition of CO₂ to heteroaromatic compounds.

Scientists at the Institute for Chemical Reaction Design and Discovery (ICReDD) in Hokkaido University have developed a method that has the potential to help recycle waste CO2 while also producing molecules useful for drug development.

In addition to the ever-more important demand for carbon-neutrality, chemists are increasingly interested in using carbon dioxide (CO2) in syntheses since it is abundant, inexpensive, relatively nontoxic, and renewable. However, the reactivity of CO2 is relatively low. To overcome this, the team led by Professor Tsuyoshi Mita utilized an electrochemical method in which an electron is added to either the CO2 molecule or to the other molecule in the solution, making it far easier for them to react with each other.

This work marks an especially large breakthrough, since CO2 is used to carry out a traditionally difficult type of transformation with unprecedented efficiency. When certain conditions are met, electrons can be shared between many atoms in a molecule by what is called an aromatic system. These systems are especially stable and difficult to break, but the new method developed at ICReDD is able to dearomatize, or break, these stable aromatic systems by adding CO2 to the molecule with the help of electricity. This process has the potential to both recycle CO2 while also producing high value-added dicarboxylic acids from simple starting materials, solving two problems at once.

Prior to the actual experiments, scientists from ICReDD screened various heteroaromatic compounds by calculating their reduction potentials, which is a measure of how a compound will react when subjected to an electric environment. The results enabled researchers to identify potentially reactive compounds and carry out targeted electrochemical experiments. They demonstrate that a wide variety of substrates that exhibit highly negative reduction potentials can very efficiently undergo this unprecedented dearomative addition of two CO2 molecules. The obtained dicarboxylic acids can be easily and cost-effectively modified into key intermediates for biologically active compounds, which could lead to more efficient and economical drug development. Researchers involved in the study attribute the rapid development of this new process to their strategy of first performing computational analyses that informed their experimental choices in the lab.

“I started to learn computational chemistry when I joined ICReDD. Within one year, I was able to utilize advanced calculation techniques, which was very useful for guiding my decisions in the lab,” said first author Dr. Yong You. “It took only eight months to complete the research and publish the paper, which is much faster than a conventional project involving experiments. Significant research time is saved because a computer can reliably predict the feasibility of the reactant structures and possible reaction pathways” commented Tsuyoshi Mita, who led this project.