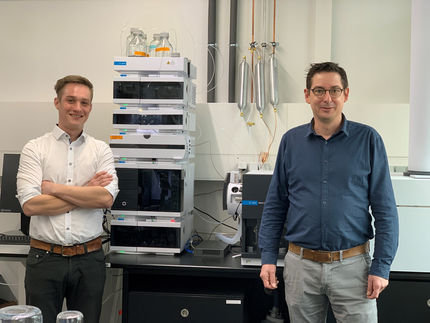 Felix Thoma and Bastian Blombach in the lab of the Professorship for Microbial Biotechnology at TUM Campus Straubing for Biotechnology and Sustainability.

Succinic acid is an important precursor for pharmaceutical and cosmetic products and also serves as a component in biodegradable plastics. It is currently derived mainly from petroleum-based processes. Researchers at the Straubing campus of the Technical University of Munich (TUM) are using the marine bacterium Vibrio natriegens as a biocatalyst. This could permit the production of succinic acid in sustainable processes using renewable raw materials.

The marine bacterium Vibrio natriegens is remarkable for its extremely rapid growth. It is the fastest growing non-pathogenic organism discovered to date. This is combined with their extremely fast uptake of substrates – the reactant materials consumed in catalytic reactions. “We are pushing hard to establish Vibrio natriegens in biotechnology,” says Bastian Blombach, Professor of Microbial Biotechnology at TUM.

Prof. Blombach’s team at TUM Campus Straubing for Biotechnology and Sustainability is investigating ways to use this marine bacteria to make production processes more time-efficient, thus conserving resources, while reducing the scale of biotechnology facilities.

The researchers have now succeeded in using the example of succinic acid to demonstrate the potential of the marine bacterium. Succinic acid is an organic substance found in fossilized resins such as amber and in bituminous coal. In nature it can be found in unripe grapes, rhubarb and tomatoes, for instance.

Succinate, the salt of succinic acid, occurs in the metabolism of all organisms, where it is used in an intermediate stage in the breakdown of glucose. The natural presence of succinic acid in metabolic processes is now being used in biotechnology efforts to produce the acid with microorganisms such as the marine bacterium studied by the TUM researchers. This requires an understanding of the metabolic action of microbial platforms such as Vibrio natriegens.

Dr. Felix Thoma, a researcher at the Microbial Biotechnology and first author of the study, explains how the team produced succinic acid: “We filled plastic tubes with a saline solution, in which Vibrio natriegens thrives, added glucose, and sealed them airtight. In the absence of oxygen, the bacteria converted the sugar and the dissolved CO2 in the medium into succinic acid. The process was completed after around two to three hours.”

In a further step, the researchers conducted the experiments in a bioreactor, where they could control the pH level, which otherwise becomes gradually inhospitable as the acid forms. This also allowed them to continually feed the co-substrate, CO2.

A bacterium soon to be a key process partner

Succinic acid is among 12 key products where bioengineering production could compete successfully with petrochemical methods in the future. “Our results after just two years of development work with Vibrio natriegens are comparable to what we see in other systems after 15 or 20 years. That makes this marine bacterium a new and potent actor in industrial biotechnology,” says Thoma.

Through targeted genetic modifications, the research team has succeeded in optimizing the bacterium’s metabolism to the point where it efficiently converts glucose into succinic acid – at a high level of productivity. “On the way to a viable industrial process, there is still work to do in terms of the process design,” says Prof. Blombach. The team is now working to develop the process with Vibrio natriegens and the usability of renewable raw materials and waste flows that do not compete with the food industry.