Pop-up factories beneath the cell membrane

Scientists have long regarded the cytosol liquid inside a cell as a large “swimming pool” in which everything floats around freely: But it seems that previously unknown structures 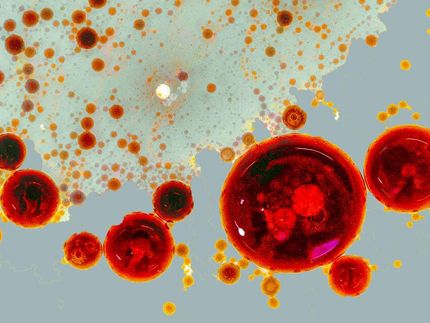 A photograph of a vinaigrette: The oil droplets symbolize the pop-up factories (RAINs). Depending on the signal strength, RAINs can assume different sizes and also fuse to then trigger global cell responses.

In a study published in Cell, MDC researchers show how a cell is able to process hundreds of signals simultaneously. Andreas Bock and his colleagues believe their findings will open up a whole new field of research in cell biology.

A living cell is exposed to a variety of stimuli. Countless messengers dock on its surface, where receptors in the cell membrane receive the incoming “orders.” Signaling cascades are then triggered inside the cell, which ultimately responds by producing or breaking down substances, or by switching genes on and off in the cell nucleus. So far so clear. But what’s exactly going on here? Researchers at the Max Delbrück Center for Molecular Medicine in the Helmholtz Association (MDC) have now discovered that the processes are far more complex than previously thought. Andreas Bock is the co-last author of the study that has been published in the journal Cell and recently headed the Receptor Signaling Lab at the MDC. He is now a professor at Leipzig University.

There are more than 800 different G protein-coupled receptors (GPCRs), which together make up the most important group of membrane proteins. The surface of a single cell can have up to 100 different GPCRs, each of which responds to very different external signaling molecules. “So you have this very high level of specificity on the outside, but only a handful of molecules inside the cell that respond to activation,” Bock says. “And yet they perform multiple and completely different tasks.” How exactly this works is something scientists have puzzled over for a long time.

One of the molecules working inside the cell is cyclic adenosine monophosphate (cAMP). If the cardiac muscle cells are stimulated with adrenaline, for example, cAMP levels increase, causing the heart to beat faster and with more force. If the same cells are stimulated with prostaglandin, however, the same amount of cAMP is produced and yet the cardiac muscle barely reacts.

Using a technique known as fluorescence microscopy, researchers examined isolated single cells to find out how cAMP signals from two different receptors are generated and processed simultaneously within a cell. One of the receptors is important for insulin secretion, while the other influences heart and lung function. They discovered that tiny domains with a radius of 30 to 60 nanometers are formed at the site of the activated receptor.

Bock compares these nanospaces to pop-up factories that form just beneath the cell membrane and get to work the moment an “order” comes in. “When one such nanospace reaches full capacity, the cAMP spills over into the next, and so the signaling cascade travels down into the cell interior,” he says.

Dr. Charlotte Kayser explains that the discovery of nanodomains greatly increases the complexity of cellular signaling pathways. Kayser is co-first author of the study, together with Dr. Selma Anton, a former PhD student at the MDC, and Dr. Isabella Maiellaro, also a former group member and now at the University of Nottingham. “The signals that originate at the GPCR initially remain at the local site and only affect the enzymes in their immediate vicinity,” she says. “Other regions of the cell are not affected by them, which allows signaling pathways to be turned on and off very precisely.”

Scientists have long regarded the cytosol liquid inside a cell as a large “swimming pool” in which everything floats around freely. But it seems that previously unknown structures – which MDC researchers are now calling “signaling nanoarchitecture” – exist in this liquid and can be switched on as needed. “We can’t visualize these nanospaces yet,” Bock says. But he suspects that cAMP is kept within the tiny spaces by a gel-like structure. These could be large scaffold proteins, for example, or cAMP-degrading enzymes that use a high concentration of cAMP to create a boundary between the cytosol and the nanodomain.

What does this discovery mean for cell biology?

It seems, therefore, that a cell is not in fact a switch that can either be “on” or “off.” The co-last author and initiator of the project Professor Martin Lohse from ISAR Bioscience in Munich explains that it functions more like a chip that processes many signals simultaneously over a very small area. “This is very important for neurons, for example, as it allows them to process different signals at each of their various protrusions: one site can be activated while another lies dormant and a third is inhibited,” he says.

It is not yet clear what impact this discovery will have on medicine, but Bock suspects that it will open up a new field of research. Future therapeutic agents could be developed to target individual components of these nanodomains, and thus act with much more precision or have fewer side effects.

When the scientists exposed the cell to low concentrations of messengers, the nanodomains were clearly delineated. At higher concentrations, the spaces began to merge. That, too, could have therapeutic relevance : “For substances that stimulate receptors to varying degrees – like different opioids, for example – this could mean the effects produced would differ not only quantitively but also qualitatively depending on whether the cAMP signals triggered in the cell remain confined to the immediate vicinity or encompass the entire cell,” Lohse adds. For now, however, the researchers need to gain a better understanding of how these tiny pop-up factories are built. Initial findings suggest that such nanodomains fail to form properly in diseased cells like liver cancer cells and cardiac muscle cells from heart failure patients.