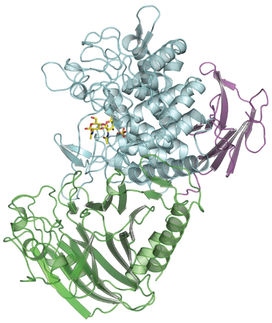 A bacterial enzyme (crystal structure shown here) makes a new type of biodegradable polymer, acholetin, which might someday find use in drug delivery, tissue engineering or other applications.

Strings of sugars called polysaccharides are the most abundant biopolymers on Earth. Because of their versatile and environmentally friendly properties, these molecules could eventually replace some plastics. Now, researchers reporting in ACS Central Science have identified a previously unknown bacterial enzyme that can make a new type of polysaccharide, which is similar to the biopolymer chitin. The new molecule is biodegradable and could be useful for drug delivery, tissue engineering and other biomedical applications.

Polysaccharides play many roles in organisms, and because they are biocompatible and biodegradable, these molecules are promising carrier materials for a broad range of therapeutics. The identity of individual sugar molecules in the chain, and the way they are linked together, make them function in different ways. Enzymes known as glycoside phosphorylases can cut certain polysaccharides apart or make new ones, depending on the reaction conditions. For example, one such enzyme makes chitin, the major component of arthropod exoskeletons and fungal cell walls. Stephen Withers and colleagues wondered if there might be previously unknown, naturally occurring enzymes that could make new types of polysaccharides.

Using genomic data and activity-based screening, the researchers identified a glycoside phosphorylase enzyme from bacteria called Acholeplasma laidlawii, a common contaminant of laboratory cell cultures. The team expressed and purified the enzyme, discovering that it could synthesize a new type of polysaccharide, which they named acholetin. The new biopolymer is similar in composition to chitin and to a biofilm-forming polysaccharide, but its sugar molecules are linked together in way that differs from these known biopolymers. The team determined the crystal structure of the glycoside phosphorylase, which they suspect could be involved in maintenance of A. laidlawii’s cellular membrane. As such, researchers might be able to target the enzyme to prevent cell culture contamination with the bacteria, in addition to using the enzyme to make the new biopolymer. Acholetin has wide-ranging potential as a new type of biocompatible, biodegradable material, the researchers say.

More about University of British Columbia