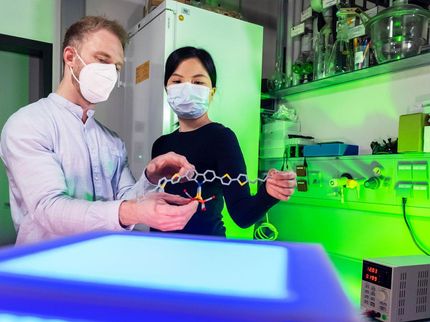 Philipp Buday (l.) and Chizuru Kasahara during an experiment on light-driven hydrogen production.

A research team from Friedrich Schiller University Jena has developed a molecular photosystem inspired by nature that generates hydrogen under visible light irradiation. In contrast to other existing systems of this type, it functions without the use of precious or heavy metals.

“What is special about our system is that it’s a relatively small and compact metal complex, which, however, doesn’t require any expensive or toxic metals, such as platinum or cadmium,” explains Prof. Wolfgang Weigand of Jena University’s Institute for Inorganic and Analytical Chemistry. “Here, the volume of hydrogen generation is about 10 times higher than in similar systems.”

The significance of this achievement is evidenced by the fact that the results have been published as a “Very Important Paper” in the internationally renowned journal “Angewandte Chemie”. No more than five per cent of all publications are accorded this status in the journal.

A model of scientific exchange

“Our system was inspired by nature,” says Weigand. “Some organisms can produce hydrogen with the help of certain enzymes, called ‘iron-iron hydrogenases’. That’s what we’re focusing on in our research. And in this work in particular, there was really wonderful synergy in the team,” he adds.

The research work was carried out to a great extent by Weigand’s doctoral candidate Philipp Buday and Buday’s former research student Chizuru Kasahara, in cooperation with the Jena research groups led by Stefanie Gräfe and Benjamin Dietzek-Ivanšić, and Ulm University.

“This collaboration was really effective,” explains Weigand. “It also shows very impressively how much science benefits from exchanges, especially as Ms Kasahara came to us through the Erasmus+ programme from Japan’s Saitama University and is now a doctoral candidate in my group.”

This work is a further step on the way to producing sustainable hydrogen, for example with the help of sunlight. “But it’s still basic research,” says Weigand. For example, this system does not currently work in water. “However, we’re currently working on this within the German Research Foundation’s Collaborative Research Centre 234 ‘CataLight’, to which the entire project belongs. Initial results already indicate that the volume of hydrogen production increases when the photosystem is incorporated into polymers. Here, we want to do further work with water-soluble alternatives in order to harness water as a solvent and source for the light-driven production of hydrogen.”