Outstanding selectivity is coupled with an unusually high efficiency 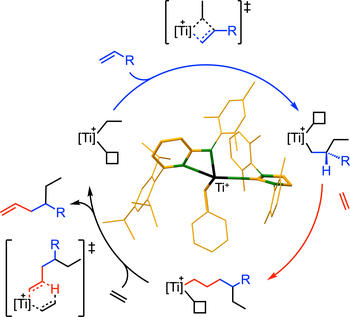 The alpha-olefins, consisting of carbon and hydrogen, are the most important precursors in the chemical industry. Researchers at the University of Bayreuth present a discovery in the journal “Science” that opens up previously unimagined prospects for the design and the selective as well as sustainable production of these chemical products. They have developed a highly selective catalyst that for the first time makes it possible to produce, using ethylene, a potentially infinite number of variations of alpha-olefins with pinpoint accuracy. Until now, such selective production methods were only available for three alpha-olefins. The new catalyst is based on titanium, one of the most abundant metals in the Earth's crust.

"Our publication is likely to spark a large number of research projects that will use our catalyst or structurally similar catalysts to selectively produce very differently structured alpha-olefins, and deploy these, in turn, as the starting materials for innovative products. Until now, alpha-olefins could only be produced in mixtures of ethylene, with three exceptions. Our synthesis of alpha-olefins is essentially based on two construction principles, elongation and branching. These can be controlled very precisely with the new catalyst," explains Prof. Dr. Rhett Kempe, corresponding author of the study, who is Chair of Inorganic Chemistry II – Catalyst Design at the University of Bayreuth.

Currently, more than 32 million tonnes of alpha-olefins based on ethylene are produced worldwide every year. They are used for the industrial production of products that are indispensable in everyday life, for example medicines, detergents, and plastics. The alpha-olefins used in this process differ in terms of their size and structure. For this reason, the chemical industry has for many decades been urgently seeking catalysts with which the molecules required in each case can be produced more precisely. In this respect, chemical research has so far only met with moderate success: highly selective catalysts have only been developed for three alpha-olefins in each case, for 1-butene (1960), 1-hexene (1989), and 1-octene (2004). All other alpha-olefins vital to industry are still only available as components of mixtures. If only one olefin is needed from such a mixture, the rest of the mixture is waste: several tonnes of waste are produced for one tonne of product. In addition, the separation of substances requires a lot of energy. Against this background, the catalyst presented in "Science" is a decisive breakthrough in terms of sustainable synthesis. It is highly selective for many, potentially infinite, variations of alpha-olefins.

This outstanding selectivity is coupled with an unusually high efficiency: The catalyst developed in Bayreuth works at an enormous speed that usually only occurs in the most active enzymes, which can only mediate much simpler reactions at such speeds. The Bayreuth catalyst can cleave a C-H bond 100,000 times per second at room temperature, and transfer the hydrogen atom to another molecule.

"Our research results show the great dynamism of catalyst research. They prove once again that fundamental challenges in the natural sciences associated with the issue of sustainability, such as climate change, energy, health, and resource conservation, can be addressed by catalysis," says Kempe.