How a chemical reaction takes place that, at first glance, should not be possible at the temperatures observed 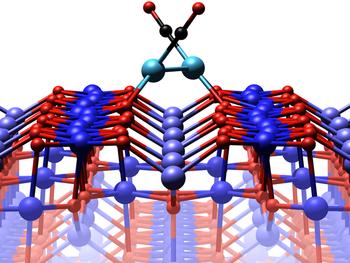 The iron oxide surface with two platinum atoms, each of which is attached to a carbon monoxide molecule.

What happens when a cat climbs onto a sunflower? The sunflower is unstable, will quickly bend, and the cat will fall to the ground. However, if the cat only needs a quick boost to catch a bird from there, then the sunflower can act as a "metastable intermediate step". This is essentially the mechanism by which individual atoms of a catalyst capture molecules in order to chemically transform them.

Several years ago, the TU Wien surface physics group discovered that platinum “single-atom” catalysts could oxidize carbon monoxide at temperatures which, according to their theoretical models, should not have been possible. Now, with the help of atomic-scale microscope images and complex computer simulations, they have been able to show that both the catalyst itself and the material on which it is anchored assume energetically unfavorable “metastable” states for a short time to allow the reaction to happen in a special way. The results have been published in the journal Science Advances.

The research group of Prof. Gareth Parkinson at the Institute of Applied Physics at the TU Wien is investigating the smallest catalysts possible: Individual platinum atoms are placed on an iron oxide surface. They then come into contact with carbon monoxide gas and convert into carbon dioxide, like happens in a modern car exhaust.

"This process is technically very important, but exactly what happens when the catalyst is reduced in size to the single atom limit has not been clear until now," says Gareth Parkinson. "In our research group, we study such processes in a number of ways: on the one hand, we use a scanning tunneling microscope to produce extremely high-resolution images on which you can study the movement of individual atoms. And on the other hand, we analyze the reaction process with spectroscopy and computer simulations."

Whether the platinum atoms are active as a catalyst depends on the temperature. In the experiment, the catalyst is heated slowly and evenly until the critical temperature is reached, and carbon monoxide is converted to carbon dioxide. That threshold is about 550 Kelvin. "However, this did not fit our original computer simulations," says Matthias Meier, first author of the current publication. "According to density functional theory, which is normally used for such calculations, the process could only take place at 800 Kelvin. So we knew: Something important had been overlooked here until now."

A metastable state: short-lived, but important

For several years, the team gathered extensive experience with the same materials in other reactions, and as a result, a new picture emerged step by step. "With density functional theory, you normally calculate that state of the system that has the lowest energy," says Matthias Meier. "That makes sense, because that is the state that the system most often assumes. But in our case, there is a second state that plays a central role: A so-called metastable state."

Both the platinum atoms and the iron oxide surface can switch back and forth between different quantum physical states. The ground state, with the lowest energy, is stable. When the system changes to the metastable state, it inevitably returns to the ground state after a short time – like the cat trying to get to the top on an unstable climbing pole. But in the catalytic conversion of carbon monoxide, it is enough for the system to be in the metastable state for a very short time: Just as a brief moment in a wobbly climbing state might be enough for the cat to catch a bird with its paw, the catalyst can convert carbon monoxide in the metastable state.

When the carbon monoxide is first introduced, two platinum atoms attach together to make a dimer. When the temperature is high enough, the dimer can move to a less favourable position where the surface oxygen atoms are less weakly bound. In the metastable state, the iron oxide changes its atomic structure precisely at this point, releasing the oxygen atom that the carbon oxide needs to form carbon dioxide, which instantly flies away – completing the catalysis process. "If we include these previously unaccounted for short-term states in our computer simulation, we get exactly the result that was also measured in the experiment," says Matthias Meier.

"Our research result shows that in surface physics you often need a lot of experience," says Gareth Parkinson. "If we hadn't studied very different chemical processes over the years, we probably never would have solved this puzzle." Recently, artificial intelligence has also been used with great success to analyze quantum chemical processes – but in this case, Parkinson is convinced, it probably would not have been successful. To come up with creative solutions outside of what was previously thought possible, you probably need humans after all.