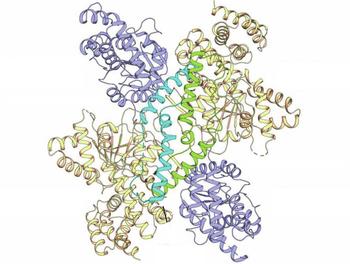 Resembles a butterfly: only in its dimer form does the mannitol-synthesizing enzyme of the hospital pathogen Acinetobacter baumannii protect the bacterium from water loss and desiccation. Picture: Klaas Martinus Pos, Goethe University Frankfurt

A team from Research Unit 2251 of the German Research Foundation led by Goethe University has shed light on the structure of an enzyme important in the metabolism of the pathogenic bacterium Acinetobacter baumannii. The enzyme “MtlD” is critical for the bacterium’s synthesis of the sugar alcohol mannitol, with which it protects itself against water loss and desiccation in dry or salty environments such as blood or urine. Structural analysis has revealed weak spots where it might be possible to inhibit the enzyme and thus attack the pathogen.

Each year, over 670,000 people in Europe fall ill through pathogenic bacteria that are resistant to antibiotics, and 33,000 die of the diseases they cause. In 2017, the WHO named antibiotic resistance as one of the greatest threats to health worldwide. Especially feared are pathogens that are resistant to several antibiotics. Among them, Acinetobacter baumannii stands out, a bacterium with an extraordinarily pronounced ability to develop multiresistance and, as a “hospital superbug”, dangerous above all for immunosuppressed patients. Acinetobacter baumannii is highly resilient because it can remain infectious for a long time even in a dry environment and thus endure on the keyboards of medical devices or on ward telephones and lamps. This property also helps the microbe to survive on dry human skin or in body fluids such as blood and urine, which contain relatively high concentrations of salts and other solutes.

Almost unique, however, is the way that Acinetobacter baumannii synthesizes mannitol: instead of two enzyme complexes as are common in most organisms, the two last steps in mannitol synthesis are catalysed by just one. A team of researchers led by Professor Beate Averhoff and Professor Volker Müller already discovered this “MtlD” enzyme with two catalytic activities back in 2018. The team headed by Professor Klaas Martinus Pos, who is also a member of the Research Unit, has now succeeded in shedding light on the enzyme’s spatial structure.

e explains: “We’ve discovered that the enzyme is usually present in the form of free monomers. Although these have the necessary catalytic activities, they are inactive. Only a dry or salty environment triggers what is known as ‘osmotic stress’ in the bacterium, after which the monomers aggregate as dimers. Only then does the enzyme become active and synthesize mannitol.” The researchers have also identified which parts in the structure are particularly important for the enzyme’s catalytic functions and for dimer formation.

Professor Volker Müller, spokesperson for Research Unit 2251, is convinced: “Our work constitutes an important new approach for fighting this hospital pathogen since we’ve identified a biochemically sensitive point in the pathogen’s metabolism. In the future, this could be the starting point for customized substances to inhibit the enzyme.”