Print tumors in the laboratory 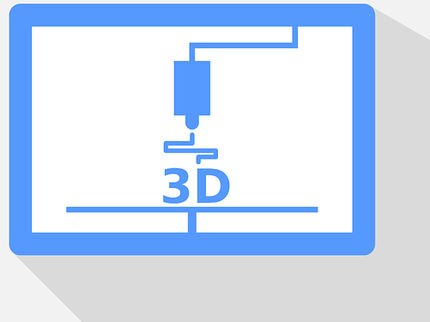 Using a bioink made from alginate and human cells, researchers at the Technical University (TU) Berlin and other institutions have printed a three-dimensional model of a cancer metastasis in healthy tissue. They used a commercially available bio-printer for this purpose, so that the tumor model can easily be adopted by other research groups. In contrast to animal experiments, the new method makes it possible to construct both the tumor and the surrounding tissue from human cells. This allows potential cancer drugs to be tested not only to see whether they destroy the tumor as hoped, but also what effects the substance has on the surrounding healthy tissue.

The fact that the fight against cancer is only progressing at a snail's pace despite decades of global efforts is also due to the poor validity of animal experiments. In the end, 97 percent of all substances identified in animal studies as promising for a cancer drug fail in clinical trials in humans. Obviously, the complex biological processes in animals and humans often differ too much to be able to make transferable statements. In the so-called xenograft model, it is now possible to introduce human tumor cells into animals and to study their control in a living organism. However, the immune system of the animals must be suppressed so that they do not reject the foreign cells. And on the other hand, the human tumor cells are then still in an environment of animal cells - and not in healthy, human tissue.

One of the most common childhood cancers

"So this situation only very inadequately recreates the real conditions in the body," explains Prof. Dr. Jens Kurreck, head of the Department of Applied Biochemistry at TU Berlin, where the study was conducted. "We wanted to improve this in our 3D printed tumor model, and at the same time help reduce animal testing." For their model, the researchers took on one of the most common childhood cancers, known as neuroblastoma. It often develops in the adrenal gland or the spine and also forms metastases. These can then usually no longer be surgically removed, but must be irradiated or fought with drugs. "The important thing here is that the drug really only damages the tumor and not the surrounding tissue," says Kurreck. The problem here is that "the tumor and its surroundings are in contact through signal molecules. This can change the behavior of both tumor and healthy cells. So a realistic experiment must include both cell types side by side."

The researchers have therefore established two model variants. One is a printed grid structure consisting of only one cell type at a time. Here, it is very easy to supply the cells with a nutrient solution via the holes in the grid. This structure can be used for rapid testing of a substance. For the simulation of a neuroblastoma metastasis, the scientists* printed a structure of concentric rings whose inner core consists of tumor cells, while the outer rings consist of healthy cells. "The challenge here was that the nutrient solution had to keep both types of cells alive. In addition, of course, the entire ring structure had to remain stable for 72 hours during the experiment," Kurreck explains. For printing, the cells are mixed with a gel-like ingredient of algae, an "alginate." After being sprayed onto a glass surface, it hardens by adding a solution of calcium ions. When printing with the spray nozzle, it is important that the cells are not destroyed by the resulting force.

Jens Kurreck's research group used neuroblastoma cells as well as healthy kidney cells as cell material. "However, the model can also be easily adapted to other cell types," he emphasizes. For substance testing, the researchers used the cancer drug panobinostat as well as the cell toxin blasticidin, which is used as an antibiotic. They investigated whether the cells were still alive or had already died using green or red fluorescent markers, respectively, which light up depending on their reaction with cell metabolism. The result: Panobinostat was correctly identified in its capacity as a drug; it destroyed only the cancer cells. Blasticidin, on the other hand, as a general cell toxin, left no surviving cells. A comparison with conventional 2D tests in Petri dishes, in which tumor and healthy cells are distributed in an unstructured manner, also showed that the new 3D printing method reacts ten times more specifically to the tested substances than the 2D Petri dish tests.

"One advantage of our model is that it does not rely on innovations in the printing device," explains Jens Kurreck. It can therefore be used by any working group with any commercially available bio-printer, he adds. Extensions to the model that also include artificial blood vessels are already being tested. In addition, tumor models that include immune cells as well as normal tissue cells would also be possible. "These have already been used successfully in other bioprinting methods," Kurreck says. "Immunological 3D tumor models would be a major advance, because immunotherapies in particular are very difficult to implement in animal studies."