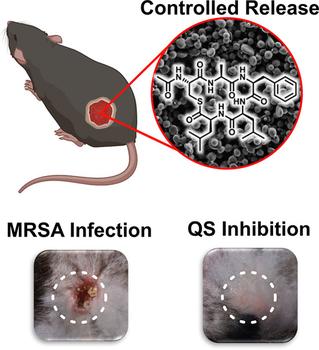 Antibiotic-resistant hospital pathogens are not to be underestimated as a health risk. A research team has now introduced a new approach for treating multiple-drug resistant Staphylococcus in the journal Angewandte Chemie. It is based on a synthetic peptide that reduces the virulence of the bacteria by blocking their communication by “quorum sensing”. Controlled release of the drug from degradable microparticles very strongly inhibited skin wound infections in an animal model.

The hospital is a place where we are supposed to get healthy, not be made sicker by a dreaded hospital infection. Pathogens that are often harmless to healthy people can become very dangerous when they enter the bodies of weakened patients, for example through surgical wounds or internal examinations. Alarm bells really start to ring in cases of multidrug resistant bacteria such as methicillin-resistant Staphylococcus aureus (MRSA), for which almost no antibiotic is effective. In the USA, about 100,000 hospital infections and almost 20,000 deaths are attributed to this bacterium.

The more antibiotics, the more resistance. The upcoming antibiotics crisis can only be overcome through alternative approaches. “Anti-virulence” strategies thus aim to reduce the infectiousness of the pathogen without killing it off. This reduces the selective pressure that leads to the development of resistance. Because the severity of the infection is reduced, ideally the patient’s immune system can fight off the infection.

As their point of attack, the interdisciplinary team working with Helen E. Blackwell at the University of Wisconsin chose a chemical communication system used by bacteria to communicate with each other, called quorum sensing (QS). Many bacteria use QS to regulate the production of virulence factors, or toxins, involved in infections. Among other things, virulence factors give pathogens the ability to attach to host cells and enter them.

S .aureus and related bacteria have a QS circuit based on the “accessory gene regulator” (agr) system. The QS signal molecule is called the “autoinducing peptide” (AIP). The research team developed a synthetic peptide similar to AIP that blocks the agr system with unusual effectiveness, also blocking QS. Omitting an end part of the peptide chain significantly slowed the degradation of the inhibitor peptide in tissue. Encapsulation of the inhibitor in biodegradable polymer particles allowed for delayed release, prolonging the period of activity—making high effectiveness at a low dose possible. In a mouse model for skin abscess, infections with S. aureus could be almost completely blocked by a local injection of the encapsulated peptide.

This new inhibitor peptide could provide an approach to therapeutic strategies for fighting bacterial infections and may provide new insights into the role of agr and QS in chronic infections. In addition, it could be the foundation for the development of coatings that block bacterial infections for applications like implants.

More about University of Wisconsin-Madison