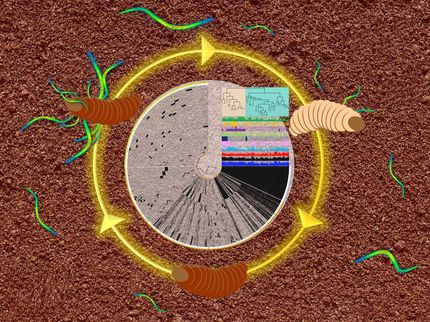 Life cycle of the entomopathogenic bacteria–nematode complex and the pangenomic approach used in this study. Bacteria of the genera Photorhabdus and Xenorhabdus live as symbionts in the intestines of soil-dwelling nematodes of the genera Heterorhabditis and Steinernema. The nematodes infect insect larvae in which they inject the bacteria. The bacteria in turn kill the insect larvae, which then become a food source for both bacteria and nematodes. Despite its complexity, this tripartite model system can be studied in the laboratory in various sub-combinations and at all life stages.

Interactions between microbes and other organisms are mediated by a plethora of small molecules, also called natural products. A research team led by Dr. Yi-Ming Shi and Prof. Helge Bode from the Max Planck Institute for Terrestrial Microbiology has now performed a systematic analysis of biosynthetic ‘dark matter’ and biological functions, thus creating a solid basis for future discovery and refinement of natural products.

When bacteria interact with other organisms, a myriad of bacterial natural products are involved. In most cases, it is not possible to trace which bacterial strain produces which natural substance and what properties it has. And thus products such as colibactin from human intestinal bacteria involved in cancer development remain the exception rather than the rule.

Xenorhabdus and Photorhabdus live in symbiosis with specific nematodes. Jointly, they infect and kill soil-dwelling insect larvae. Within this relationship, the bacteria are responsible for the production of numerous toxins and other interaction-mediating substances. At the same time, they can be cultured and genetically manipulated in the laboratory in the absence of their nematode host. Therefore, they are considered promising research models for studying the chemical ecology of bacterial natural products.

Now, for the first time, the bacteria have been systematically studied in a combination of pangenomic and domain sequence similarity analysis with respect to two central questions: which gene clusters are responsible for natural product production, and are they evolutionarily conserved or unique to these bacterial genera?

The researchers led by Dr. Yi-Ming Shi and Prof. Dr. Helge Bode identified 1,000 biosynthetic gene clusters, over half of which are previously unknown. Using homologous expression and chemical structure analysis the research team uncovered a veritable biochemical treasure trove. But what does the nematode host benefit from these bacterial substances?

“Our bioactivity evaluation demonstrates that the prevalent compounds are eukaryotic proteasome inhibitors that presumably suppress the immune system of insects, but we identified also other virulence factors against insects or suppressors of the insect immune system. Thus our findings account for the molecular functional basis of these bacterial natural products,” says Yi-Ming Shi, first and correspondence author of the publication. “Among the new discoveries, many natural products stand out not only due to their unusual chemical structural features and modes of action, but also their prevalence across different bacteria taxa. This implies possible universal chemical weapons in bacteria.”

Identification and functional characterization, which were performed in cooperation with Prof. Yonggyun Kim from Andong National University (Korea), Prof. Michael Groll from Technical University of Munich, and Prof. Rolf Müller from Helmholtz Institute for Pharmaceutical Research Saarland, revealed how bacteria orchestrate the interplay of natural products to maintain their symbiotic lifestyles, while pointing to the enormous capabilities of the genus Xenorhabdus in particular to produce novel natural products for drug leads. As such, however, this work also lays important groundwork for significantly accelerating the discovery and refinement of natural products in microbiomes from other niches.