This affects around 15% of the population 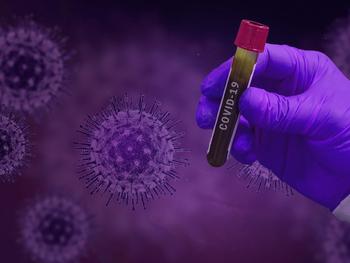 Distinct genetic variants significantly influence an individual's immune response to the SARS-CoV-2 virus and may influence the COVID-19 disease severity. A research group led by MedUni Vienna was able to demonstrate that distinct genetic variants of the CD16a antibody receptor are associated with the risk of severe COVID-19. This affects around 15% of the population. The results were now published in the journal "Genetics in Medicine".

Natural killer cells (NK cells) play a significant role in combating the viral replication in the initial stages of viral infections. NK cells have specialized receptors on their surface that bind to antibodies that are specifically produced against viruses. This enables the antibody-dependent activation of killer cells (ADCC), which leads to the destruction of virus-infected cells and triggers the release of pro-inflammatory factors.

This interaction between antibodies and the NK cell surface receptor is influenced by certain genetic factors, resulting in either strongly (high-affinity) or weakly (low-affinity) binding genetic receptor variants. Working in collaboration with Alexander Zoufaly from the Favoriten hospital, a research group led by Hannes Vietzen and Elisabeth Puchhammer-Stöckl from the Center for Virology of the Medical University of Vienna has now shown that certain genetic variants of the CD16a antibody receptor are associated with the risk of severe COVID-19.

In subsequent cell culture experiments, the research team was able to show that this high-affinity variant of the antibody receptor results in a significantly elevated antibody-dependent activation of NK cells and in a particularly strong release of pro-inflammatory factors.

Hannes Vietzen explains: "The antibody-dependent activation of NK cells is a delayed immune response. It now appears that this particular immune response no longer helps to control the SARS-CoV-2 viral replication but aggravates the course of COVID-19 disease by triggering an exaggerated immune response."

The tests involved are special scientific assays. Routine laboratory testing for these parameters is not being considered, since there are currently no therapeutic or preventive options targeting this genetic predisposition to reduce the risk of severe COVID-19. Genetic predisposition is further only one of several factors that influence the severity of the disease.