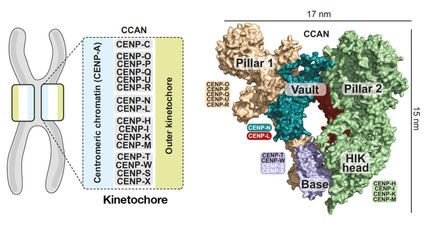 Organization of the human CCAN. Left: Scheme of the kinetochore organization with the CCAN subcomplexes binding to the centromere protein A (CENP-A). Right: Model of the surface of the CCAN’s 16 components organized in different subcomplexes.

Human cell division involves hundreds of proteins at its core. Knowing the 3D structure of these proteins is pivotal to understand how our genetic material is duplicated and passed through generations. The groups of Andrea Musacchio and Stefan Raunser at the Max Planck Institute of Molecular Physiology in Dortmund are now able to reveal the first detailed structure of a key protein complex for human cell division known as CCAN. By using cryo-electron microscopy, the researchers show important features of the complex’s 16 components and challenge previous assumptions about how the complex is able to recognize the centromere, a crucial region of chromosomes in cell division.

At the centre of cell division

Unresolved questions at the core

Scientists identified the CCAN complex over 15 years ago. “Yet, building up a pipeline to synthesize all proteins in vitro has been a major obstacle”, says Musacchio. After obtaining a first reconstitution of the human CCAN complex in vitro, Musacchio joined forces with Stefan Raunser, also at MPI Dortmund, who applied cryo-electron microscopy on the whole CCAN protein complex.