How faulty mRNA is detected and destroyed

Two similar proteins can stand in for each other in the quality control mechanism of defective mRNA. This has redefined the distribution of protein tasks 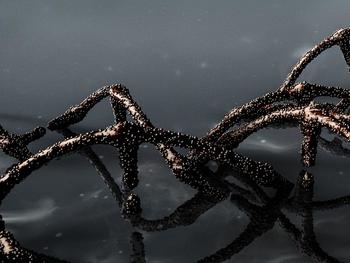 Scientists led by Professor Dr Niels Gehring at the Institute for Genetics at the University of Cologne have investigated two similar proteins, UPF3A and UPF3B, which are involved in the quality control mechanism ‘nonsense-mediated mRNA decay’ (NMD). Their results show that both proteins are able to ensure the execution of NMD in the absence of the other and thus have at least partially the same functions. The quality control mechanism NMD prevents defective mRNA from being further processed into proteins that may possibly have undesired or even toxic effects in our cells. Messenger RNA, or mRNA for short, has been common knowledge since the corona pandemic. The messenger molecule carries information from which proteins can be produced in the cell.

Many different proteins are involved in the NMD process. However, it is not yet fully understood how exactly these proteins work together to control mRNA during protein production. Several theories have been put forward in recent years about the two proteins UPF3A and UPF3B, some of which are contradictory. While UPF3B is established as an NMD-activating factor, UPF3A was claimed to be – despite its similarity to UPF3B – its antagonist and thus an inhibitor of mRNA degradation. Through comprehensive molecular biological investigations such as RNA sequencing, mass spectrometry and CRISPR-Cas9, the team from Cologne showed that both proteins are able to activate the quality control mechanism of mRNA and thus render defective mRNA harmless. In addition, the team was also able to disprove the established function of UPF3B as a so-called ‘bridge protein’. According to this, the main function of UPF3B was to serve as a connection between two protein complexes, i.e. like a bridge between two pillars, in order to thus enable the recognition of faulty mRNAs. But even without interaction with one of the two protein complexes, i.e. one of the pillars - which would cause a bridge to collapse - the protein UPF3B is able to perform its normal function. So, it still seems to perform a bridge-independent function.

‘We wanted to put an end to the discussion about the two UPF3 proteins and answer the question of whether they have the same or opposite functions,’ said Professor Gehring. The results also provide new insights into the functions of UPF3B. ‘These findings are important because it is known that people with learning disabilities carry in some cases mutations in the gene for the UPF3B protein. By continuing to study the UPF3B protein, we hope to unravel the link to its function in the human brain. But to do that, we first need to understand what exactly the protein's molecular function is.’