Breakthrough in the field of precious metal-oxo chemistry 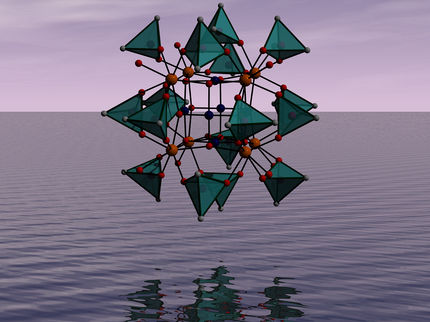 Scientists at Jacobs University Bremen led by Ulrich Kortz, Professor of Chemistry, have achieved a breakthrough in the field of precious metal-oxo chemistry. For the first time, researchers have synthesized cationic, meaning positively charged, metal-oxo clusters based on palladium. They report on the synthesis and properties of these compounds in the journal Angewandte Chemie, which classifies the article as a Hot Paper and thus as a particularly important contribution. The research project involved the working groups of four professors at Jacobs University.

Kortz is a pioneer in the research area of anionic metal-oxo clusters, a class of compounds also known as polyoxometalates (POMs). His research group discovered the subclass of polyoxopalladates (POPs) in 2008 and has continuously developed it further ever since. A large number of these structurally and functionally interesting compounds have since been published by his research group. These compounds are primarily anionic, meaning that they are negatively charged. Saurav Bhattacharya, an experienced researcher of Professor Kortz's work group, developed a series of neutral POP species for the first time in 2020, which was a breakthrough in itself at the time. Now, continued efforts by him have led to the discovery of two cationic palladium-oxo clusters (POCs).

"This is a highlight in our research. By incorporating the rare earth elements cerium or thorium next to palladium, we were able to prepare the first cationic POCs. This now allows us to study their interactions with different anionic species, and takes us into completely new research areas," said Kortz. The new materials have a number of potentially interesting properties. For example, biomedical studies can be conducted where supramolecular host-guest chemistry plays an important role. The goal, for example, is to transport medically active substances into the body in a targeted manner. Possible applications could also be in the field of carbon dioxide reduction and industrial catalysis.

With respect to their molecular structure, the cationic palladium-oxo clusters are built like a Matryoshka doll. The core consists of a 6-palladium(II)-oxo unit surrounded by eight cerium(IV) or thorium(IV) ions. This assembly is further capped by 16 dimethylarsinate groups and eight water molecules, resulting in the formula [Pd6O12M8{(CH3)2AsO2}16(H2O)8]4+ (M = Ce, Th).

For the investigation of some properties of the new class of compounds, Ulrich Kortz also called on the expertise of other scientists at Jacobs University. The working groups of chemists Professor Werner Nau and Professor Nikolai Kuhnert as well as physicist Professor Veit Wagner were involved in the studies. "One of the strengths of Jacobs University is the mutual interest of colleagues in close, transdisciplinary and collegial collaborations," said Kortz. "Our labs are spatially close to each other, and we know and complement each other well." Also involved was chemist Professor Pawel Kulesza from the University of Warsaw, Poland.